Nadungamuwa Raja, 65 years old, is a celebrated elephant towering around 10.5 feet in height, the tallest tamed tusker in Lanka. 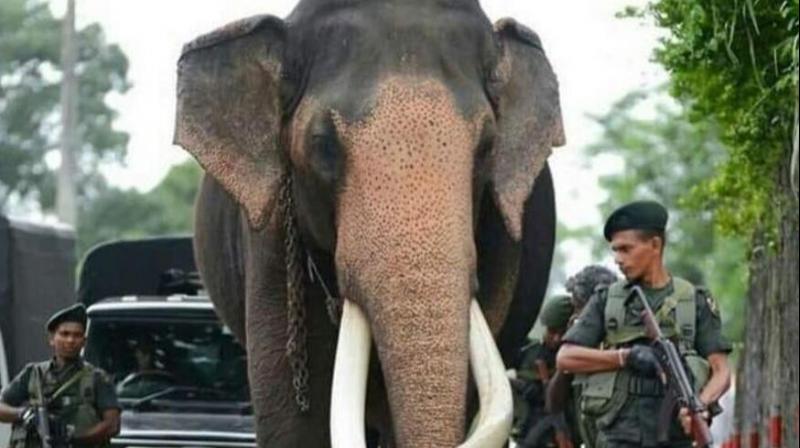 Raja’s owner said the government has allocated troops to provide security for his pet as it ambles along main roads to attend temple festivals across the island. (Photo: Facebook)

Sri Lanka: Nadungamuwa Raja, 65 years old, is a celebrated elephant towering around 10.5 feet (3.2 metres) in height, the tallest tamed tusker in Sri Lanka. And he has his own armed guards.

Raja’s owner said the government has allocated troops to provide security for his pet as it ambles along main roads to attend temple festivals across the island.

“In September 2015, a motorcyclist very nearly crashed into Raja. After seeing CCTV footage, the government contacted me and offered protection for Raja when he gets on the road,” Harsha Dharmavijaya told AFP.

There are two regular handlers with Raja in addition to the military unit deployed to clear a path for the animal when it navigates crowded country roads.

Raja is an unofficial national treasure because he is one of the few tuskers chosen to carry a casket of Buddha relics in an annual pageant at the most sacred Buddhist shrine on the island, the Temple of the Tooth.

Raja walks 90 kilometres (55 miles) to the hill resort of Kandy for the event, called the Esala pageant. He walks 25 to 30 kilometres a day, travelling mostly at night when it is cooler.

The pageant in August involves nearly 100 elephants and many more traditional dancers, fire-eaters and drummers, and is a key tourist attraction.

The animal was withdrawn from the finale of the Temple of the Tooth pageant last month after a social media firestorm erupted against parading the feeble animal.

Many rich Sri Lankans keep elephants as pets, but there have been numerous complaints of ill-treatment and cruelty.