Year ender 2017: The toll of environmental disasters on Earth 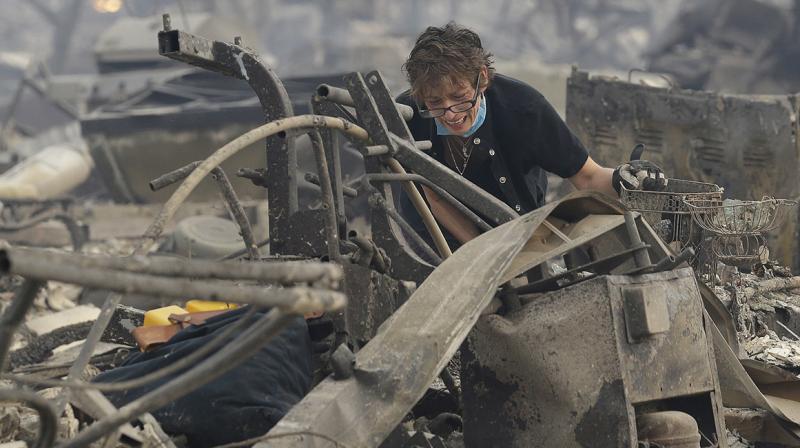 2017 has been a crippling year in so far as natural calamities are concerned, snowballing the earth into -- albeit gradual -- decay, in the form of floods, hurricanes, earthquakes, wildfires. (Photo: AP)

Mumbai: We entered into 2017 with promises of a new tomorrow and inhibitions about the uncertain future.

The world teetered between missile launches and amusing faux pas on Twitter; and as we skipped beats between Donald Trump and Kim Jong-Un’s ‘war of words,’ to take note of legislations that were passed, governments that were toppled, snap polls and riding the Right Wing wave, something larger was happening around us.

2017 has been a crippling year in so far as natural calamities are concerned, snowballing the earth into -- albeit gradual -- decay, in the form of floods, hurricanes, earthquakes, wildfires and the threat of a volcano erupting in Indonesia, which had hundred of passengers stuck at Bali airport for days. 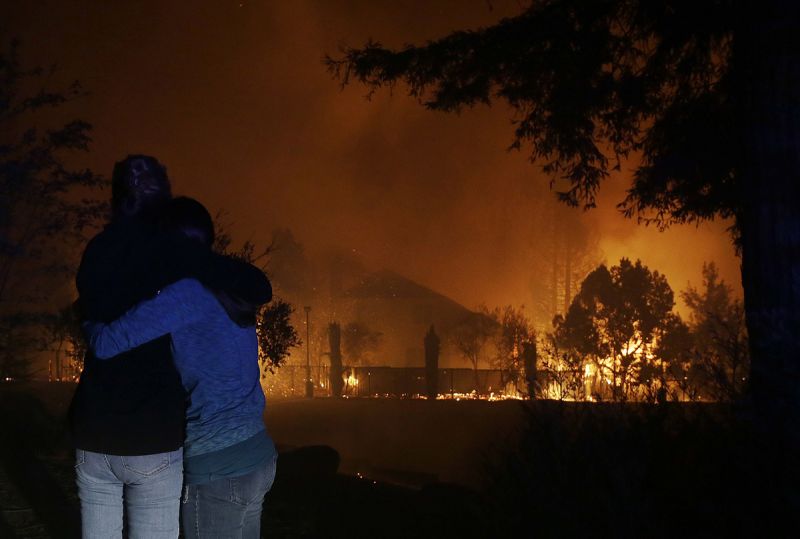 Being regarded as the ‘worst’ in the state’s history, wildfires in California wreaked havoc in 2017. As many as 8,779 fires have burned 1,372,904 acres of land according to California Department of Forestry and Fire Protection, records. A total of 250 fires ravaged Northern California, displacing scores, killing 44 and injuring almost 192 people. In 2017, California witnessed five of the worst wildfires in the state’s history, namely, Tubbs Fire, Nuns Fire, Thomas Fire, Atlas Fire and Redwood Valley Complex Fire, that scorched through the state between October and December. Destroying insured property worth USD 9.4 billion in October alone and forcing 212,000 people to evacuate and burning down 1,300 structures by December, the total economic loss from wildfires in 2017 accrued to USD 180 billion. The economic losses can take years to recover making California wildfire season in 2017 not just most catastrophic but also most expensive. 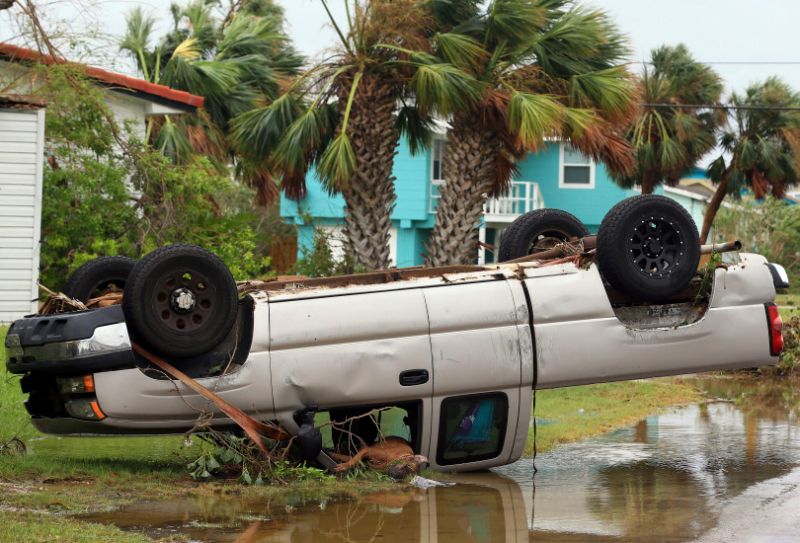 The remnants of the hurricane Harvey spun deep into Texas and unloaded extraordinary amounts of rain. (Photo: AP)

Parts of the Gulf and Mediterranean are still reeling from the destruction brought forth by storms and hurricanes as the rest of the world gears up to kick-start 2018.Hurricane Harvey, a Category 4 storm with 120 mph winds which devastated south Texas and Louisiana claimed 82 lives, CNN reported. The total cost incurred by Hurricane Harvey added up to USD 180 billion in damages.

Florida, Georgia and South Carolina had to bear the brunt of Irma, recorded as the strongest Atlantic basin hurricane ever. 95 per cent of Barbuda stood depleted as the Category 4 wind stormed through Caribbean nations. With a maximum strength of 130 mph winds, Irma claimed 61 lives and USD 200 billion in damages.
In September, Puerto Rico was hit by Hurricane Maria, which with  its 155 mph winds was the first to directly hit the island in 85 years. Thousands of victims are still grappling with the lack of basic supplies and amenities. Official death toll stood at 55 however, a CNN investigation tallied almost 500 deaths with funeral homes. As 113 people remain missing, Maria’s total economic loss adds up to USD 95 billion. 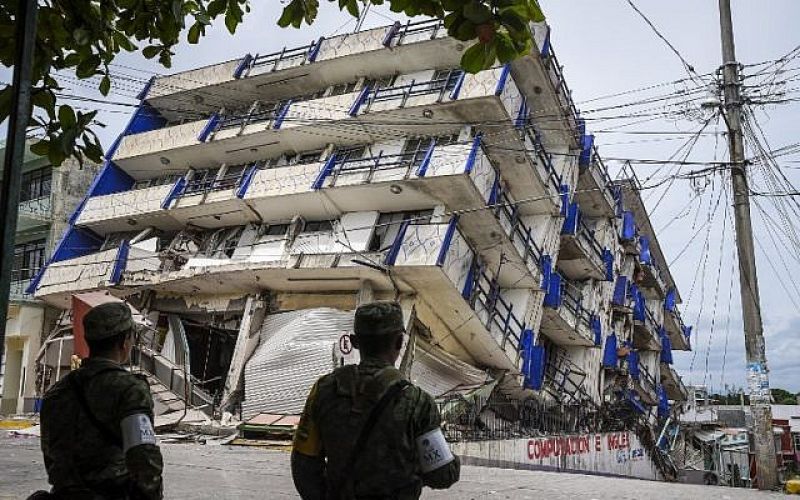 Soldiers stand guard near the Sensacion hotel which collapsed during the powerful earthquake that struck Mexico on September 8, 2017. (Photo: AFP)

On 19th September, as Mexico – a seismically sensitive region – coincidentally marked the 32nd anniversary of the 1985 Mexico City earthquake, the country was jolted into destruction by a 7.1 magnitude earthquake. 370 people were killed as the city reduced to rubble with 40 buildings collapsing. 6000 people were injured causing damage to the Mexican states of Puebla, Morelos and Greater Mexico City just 12 days after the even larger Chiapas earthquake wreaked ruination in the country. 20 children were killed as a school crumbled down. The total economic loss from the earthquakes amounted to less than 1 per cent of Mexico’s GDP. 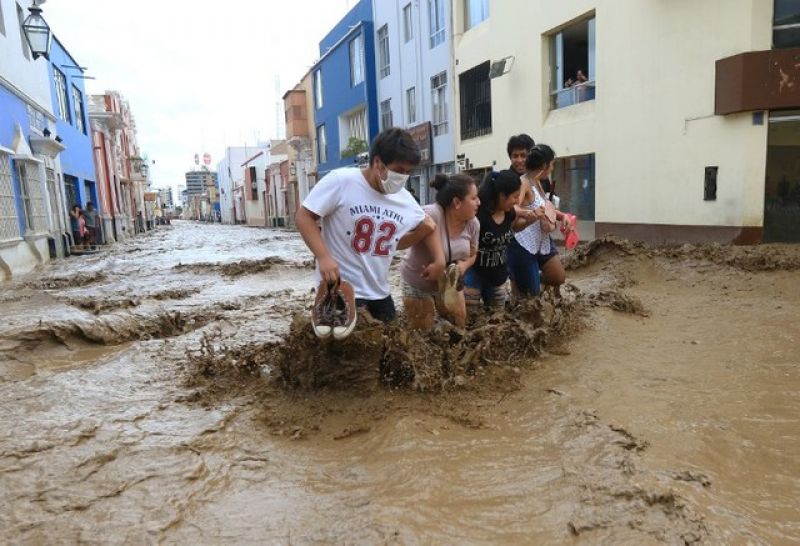 Residents wade through the water as a flash flood hits the city of Trujillo on March 18, 2017, bringing mud and debris. (Photo: AFP)

Flooding which began in 2016 and continued into the first few months of 2017 buried Peru in warm Pacific waters affecting 1 million people and killing 150, Reuters reported in July. The losses incurred and reconstruction efforts could accrue to USD 9 billion. 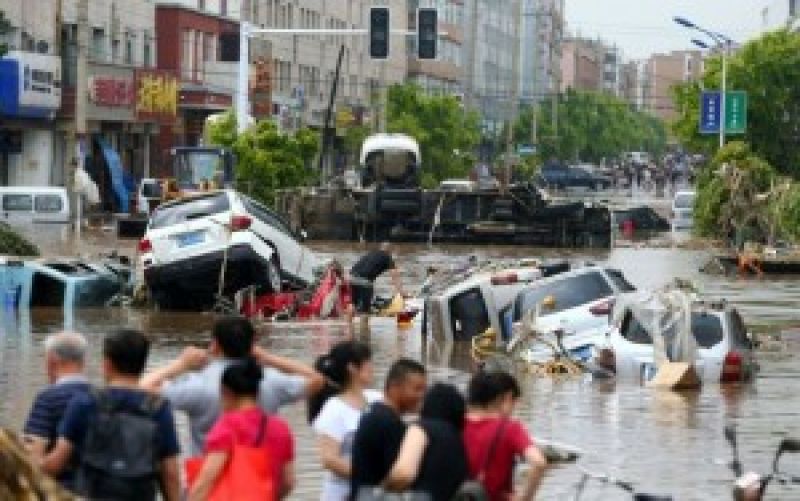 Floods in China beginning in January 2017 impacted 14.9017 million people in ten provinces of which Hunan was hardest hit. (Photo: AFP)

Floods in China beginning in January 2017 impacted 14.9017 million people in ten provinces of which Hunan was hardest hit. 18,100 houses were destroyed and crops spread across 2.426822 acres were inundated. Water levels in more than 60 rivers in southern China had crossed well above the warning levels in lieu of continued rainfall with many major rivers flooding and crossing danger levels. In the aftermath of the floods, Hunan Provincial Commission for Discipline Inspection punished 15 officials as death tolls and losses steadily increased. Floods in China claimed 144 lives in 2017 and incurred heavy economic losses as it crippled productivity.

Ockhi: Cyclone Ockhi which originated in the Gulf of Thailand and dissipated near the coast of Gujarat in western India left a trail of destruction behind it. It was the strongest storm of the 2017 North Indian Ocean cyclone season. Despite changing its course near Kanyakumari, toward Lakhwadeep and sparing mainland India, the cyclone incurred severe damages to structures and property, apart from the loss of human lives. Ockhi impacted Sri Lanka, Lakshwadeep, South India and Maldives. It claimed more than 245 lives and 551 went missing -- of whom most were fishermen -- uprooting infrastructure and disabling livelihoods. In Kerala, which was badly hit, Chief Minister Pinarayi Vijayan, declared a compensation of Rs 20 lakh to the families of those who died and Rs 5 lakh to those who were permanently disabled due to the cyclone.

2017 was an eventful year that had human-kind on its toes -- on the brink of war that could have (and still can) begun anywhere, from Pyongyang to Middle East. As Palestine rose in protest to Trump’s recognition of Jerusalem as Israel’s capital, Syria drove out ISIS after a gruelling and devastating war.

At the same time, hundreds of thousands of Rohingyas fled ethnic cleansing by the Myanmar army to crowd up in Bangladesh’s refugee camps. Terror attacks, hate crimes, immigration, sexual scandals, collectively, were boiling up as we saw; but so was the Earth.

It may have seemed like any other year, with its standard quota of calamities. However, the loss from environmental mishaps this year, when seen in terms of the economic loss it incurred, can perhaps seem more alarming than it does at first glance. According to Quartz, “Insurance firm Swiss Re, which makes this calculation every six months, estimates the economic loss in 2017 to be USD 306 billion, which is almost double 2016’s loss of USD 188 billion (and also much higher than the 10-year-average of USD 190 billion).”

In US alone, the tolls from Hurricanes Harvey, Irma, and Maria accrued to the tune of USD 93 billion with California wildfires expected to add another USD 7 billion. Thunderstorms that rocked central and southern states in the US will cost another USD 2.5 billion.