India   All India  03 May 2018  Antagonism towards India is Pakistan’s policy pillar
India, All India

Ashok Bhan
Ashok Bhan is a senior Supreme Court lawyer and Chairman of Kashmir Policy and Strategy Group. He can be reached at ashokbhan@rediffmail.com

The Narendra Modi government’s policy to isolate Pakistan from the UAE, Central Asian countries and other relevant nations has succeeded. 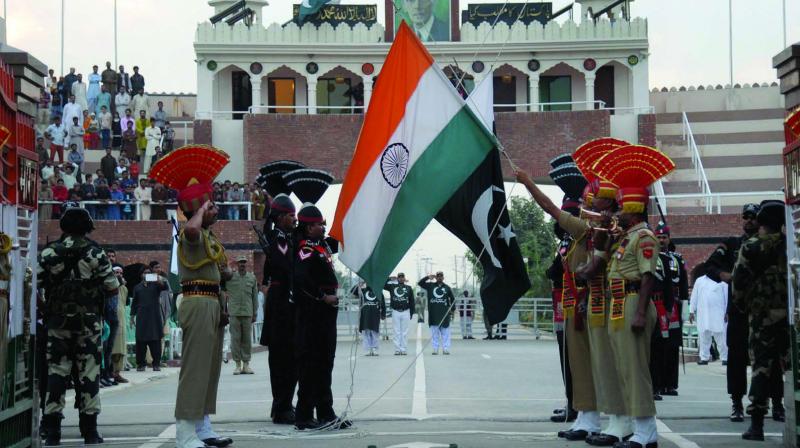 Pakistan using terrorist groups as part of its security and foreign policy shows its obsession with India which it perceives as an existential threat. The ideology of Pakistan is built on twin pillars of Islam and antagonism towards India. Pakistan never realised that as a nation state it should create its own history and move forward but lived with historical appropriation and distortions of the past. Pakistan could acknowledge its Indian heritage as well as the Muslim-ness of a majority of its population. Instead successive Pakistani leaderships and the intelligentsia preferred to build the idea of Pakistan on pillars of Islam and antagonism towards India. But Pakistan’s paranoia regarding India is unfounded.

The relations with Pakistan have been defined by the Partition in 1947, the Kashmir conundrum and the military conflicts fought between the two South Asian neighbours. The relations have always been plagued by conflicts, hostilities and suspicion despite the fact that the two share common linguistic, cultural, geographical and economic linkages.

Pakistan’s brazen belligerence continues towards India in spite of the extension of an olive branch from time and again by India for good neighbourly relations. Pakistan’s Kashmir rants echo always in United Nations Human Rights Council at Geneva and rakes up the issue at UNGA. India fiercely replies calling Pakistan as “Terroristan” and asserts J&K as its integral part. India is not willing to renegotiate Kashmir’s territorial status. The bilateral issues can be addressed through talks and negotiations.

There have been military wars, continuing undeclared wars, numerous skirmishes and stand offs. Many successful attempts to improve relations through Shimla Agreement, Agra and Lahore summits, etc, have fallen apart. The relations soured after Siachen conflict of 1980, Kashmir insurgency of 1989 onwards and the Kargil war. Terror attacks on Indian Parliament in 2001 almost brought two nuclear nations to a brink of war. Mumbai terror attack of 2008 by Pakistani terrorists that killed hundreds, and its continuous support to terrorists in Kashmir to delegitimise the idea of India has soured our relations further.

The Narendra Modi government’s policy to isolate Pakistan from the UAE, Central Asian countries and other relevant nations has succeeded. By now the world has acknowledged the stark truth that Pakistan is the sponsor of terrorism in Afghanistan and India and poses a serious threat to security in the South Asian region. As such no dialogue with Pakistan is the policy narrative of the MEA, PMO and the foreign policy experts.

The US has always been helpful and concerned about the regional security in South Asia. US experts feel that India-Pakistan tensions will complicate and spoil US’ interest in the region. In India, the foreign policy experts wish to alert Mr Modi on the implications of the close China-Pakistan relations as Beijing is trying to remake geography by launching huge infrastructure roads and bridges on the borders. Therefore, persistent and astute diplomatic engagement at a comprehensive level with nations in the region becomes important.

Despite having started to reboot its diplomatic ties with the US to end the stalemate of the last few years, Islamabad’s relations with other nations have been on the downside because it lied to the world about the presence of Al Qaeda chief — Osama bin Laden — in Pakistan. The Americans nailed these lies by carrying out Operation Neptune Spear and he was found in Abbottabad near the elite military school in Pakistan and was liquidated. All eyes are on Pakistan and it has to come clean and stop breeding terrorists in its backyard and root them out.

US President Donald Trump has voiced his strong-arm policy against terrorism. Pakistan has to take it seriously if it wishes to get financial aid from the US. Financial Action Task Force is eyeing Pakistan. China removed the objection to put Pakistan on the grey list by FATF. Pakistan is being placed on global terrorist financing list from June 2018 onwards that would endanger its handful of remaining banking links to the outside world causing financial pain to its economy. Saudi Arabia has also removed its objection and now only Turkey is supporting Pakistan. President Trump has said it is time to expose and hold responsible those countries who breed, support and finance terror groups. The Trump administration has charted a new South Asia policy in which it has sought a larger role for India in Afghanistan and in South Asia and has put Pakistan on notice.

Pakistan’s temper tantrums and petulance responses have not convinced the US and other nations. Pakistan has to take a hard look at options. It has to play tough against Hizbul Mujahideen, Lashkar-e-Taiba, Jaish-e-Mohammad, Haqqani Network and all other similar groups. The Afghan government suspect the newly surging ISIS in Khorasan and other terror groups are getting support from Pakistan and are allowed free operations from its soil, raise funds, march in raucous rallies and openly support terror export to other countries, including India, with the help of handlers in Pakistan.

Mr Modi is advised to know that he may not be able to transact any big issue with Pakistan because it wants business on Siachen and Sir Creek, which in turn is always demurred. India does not buy any formula on Kashmir, as it firmly believes terror and talks cannot go together until and unless Pakistan brings to the book perpetrators of 26/11 Mumbai killings. The territorial status of Kashmir is not negotiable. Thus, the only issue that can find an agreement is enhanced trade relations and other economic development schemes but that too will take some time to materialise.

Conducting frequent talks at different levels, which do not yield satisfying outcome, is part of diplomacy. India and its Prime Minister are to be seen as a participant in the process of buying peace with even the hostile neighbour country to promote his credentials as a moderniser internationally.

No foreign policy or diplomacy of a nation state runs without engagement and dialogue with other countries. The BJP and Sangh Parivar have to change their political narrative from the emotive right-wing rhetoric to a tolerant and moderate political discourse, backing up the Prime Minister’s diplomatic effort. Only then the PM can focus on the prospects of resolving the bigger issues of the country.