Mr Gandhi, who will be in Gujarat from October 9 to October 11, will start with a visit to Santram temple in Nadiad. 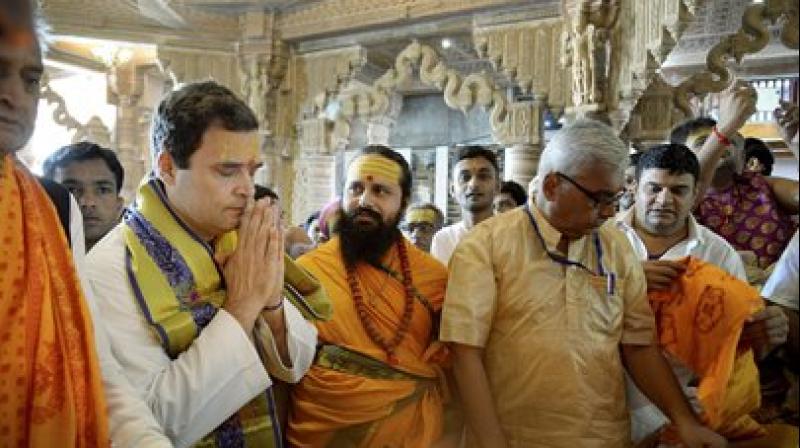 New Delhi: In its bid to widen its appeal and make an impact in the forthcoming Assembly elections, a desperate Congress is once again trying to play the soft Hindutva card in the BJP citadel, Gujarat.

Congress vice-president Rahul Gandhi, who began his three-day tour of Gujarat’s Saurashtra region on 25 Septmber by visiting the Dwarkadhish temple in Dwarka, is all set to continue with his temple run in the second leg of his campaign in the central region of the state.

Mr Gandhi, who will be in Gujarat from October 9 to October 11, will start with a visit to Santram temple in Nadiad. He is also expected to visit the Bhathiji Maharaj temple in Fagvel, Ma Kali temple in Pavagadh, and Dakor temple in Kheda district.

Mr Gandhi’s tour of temples in the BJP-ruled state is a two-pronged strategy. On one hand it is hoped that the soft Hindutva card will take the sting out of the “Italian” jibe the BJP is so fond of making, on the other, each of these temple trips is aimed at wooing specific communities.

The Congress hopes that the temple visits will bring back the communities that have shifted their allegiance to the BJP.

In his first visit, Mr Gandhi visited four key temples in the Saurashtra region of Gujarat, including Khodal Dham temple in Kagvad village to offer prayers to Khodiyar Mata, the reigning deity of the Leuva Patel community.

In his next visit he will be visiting the Pavagadh temple, dedicated to the reigning deity of Patels, and the Bhathiji Maharaj temple, which is revered by the Kshatriyas.

The influential Patel community constitutes almost 13 per cent of the population of Gujarat. As they are unhappy with the BJP, the Congress is going all out to woo them.

The Congress also has its eye on the Kshatriyas vote, especially since Shankarsinh Vaghela, former chief minister of Gujarat and a tall Kshatriya leader, left the Congress.

While playing the Hindutva card, the party is being careful not to alienate the minority vote bank. Local Congress leaders are in constant touch with influential Muslim leaders, sources said.

In his third visit, which is scheduled after Diwali, Mr Rahul Gandhi will be campaigning in north Gujarat and visit Ambaji, Bechraji and Unjha among other places.

A section of leaders in the BJP claimed that with the saffronites accusing the Congress of  “minority appeasement”, Mr Gandhi is trying to negate the charges with his temple run. However, the Congress has been denying the charge of soft Hindutva.

Former finance minister P. Chidambaram said, “I don’t think you should read political meaning into that. I think there is much else that is happening in his visit to Gujarat. I think we should focus on that.”

While the Bharatiya Janata Party is desperately trying woo the dalit voter, Mr Patel claimed in a TV interview that his main aim is to “defeat the BJP.”