The announcement of Gandhi’s election to the post was made by the Congress’ central election authority chairman Mullapally Ramachandran. 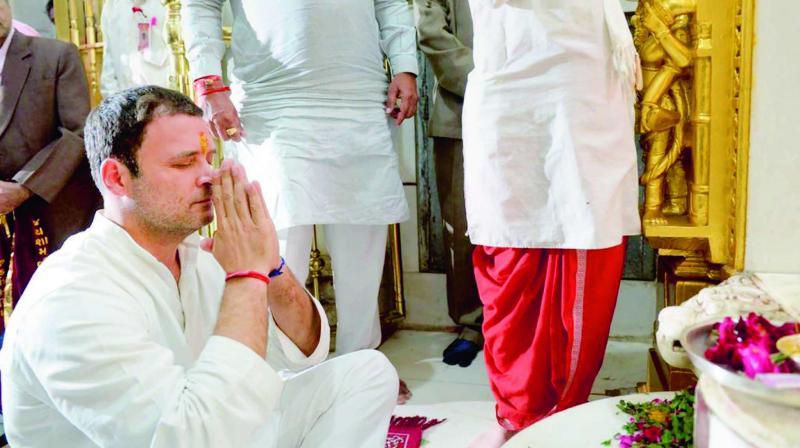 New Delhi: The scion of Nehru-Gandhi family and Congress vice-president Rahul Gandhi was finally crowned the 87th president of the Indian National Congress (INC) on Monday, an outcome which did not come as a surprise due to his unopposed candidature for the top post in a party election that was reduced to a formality.

Mr Gandhi, 47, will officially take charge of the party by replacing his mother Mrs Sonia Gandhi on December 16, two days before the announcement of election results for Himachal and Gujarat Assembly polls.

As expected, Mr Gandhi was elected unchallenged. There was a minor storm in the teacup when Shehzad Poonawalla, Maharas-htra Congress state unit secretary, questioned called the organisational elections a sham. On Monday, Mr Poonawalla tweeted that Mr Gandhi’s election marked a black day for the party.

The announcement of Mr Gandhi’s election to the post was made by the Congress’ central election authority chairman Mullapally Ramach-andran. He said Mr Gandhi will formally take over the reins of the party on December 16.

While the party and its leaders fell over each other on Monday to congratulate the president-elect, all eyes are on the outcome of Gujarat polls, being dubbed as a fight between Mr Gandhi and Prime Minister Narendra Modi.

Till now Mr Gandhi’s record in electoral politics has been an embarrassment for the party. His electoral credibility continues to remain suspect even among a section of party leaders. If Mr Gandhi manages to trounce Mr Modi in his home turf, he will emerge as nothing less than a superhero. But if mauled and trounced in Gujarat, his leadership will again come under scanner and be questioned.

Mr Gandhi, often branded as “Pappu”, particularly by the BJP, virtually stumped the saffronites with his new avtaar as he led the charge in Gujarat election whose final phase of polling is scheduled for December 14.

Mr Gandhi hasn’t merely taken on the BJP on the social media, but has won several rounds in this virtual battlefield which had so far been dominated by the saffronites. He has also been described as a “rockstar” due to the mega response to his rallies in Gujarat.

That the BJP, its president Amit Shah and the Prime Minister have begun to take him “seriously” became evident when they relentlessly targeted him and kept referring to him in their speeches.

On Monday, however, Mr Modi “congratulated” Mr Gandhi on taking over as Congress chief. “I congratulate Rahulji for his election as Congress president. My best wishes for a fruitful tenure.”

Congress insiders feel that besides the uphill task of taking on Mr Modi, the Congress president-elect would now have to chalk out the roadmap ahead. “The most crucial part will be to maintain a delicate balance between secularism and soft Hindutva,” a senior Congress leader said.

Congress leaders also said that Mr Gandhi will have to counter the “militant nationalism”, being propagated by the BJP, with his “Nehruvian views”.

Regardless of the outcome of the Gujarat polls, a section of BJP leaders, while speaking to this newspaper, “appreciated” the way Mr Gandhi has managed to dodge the Modi-Shah’s baits with nationalist and communal overtones during the campaigning. Mr Gandhi kept his focus on economic policies of the Modi government, while the BJP and its leaders evoked nationalism, Pakistan and even played religion and caste cards.

As for the changes expected in the Congress under its new president, speculation is rife that unlike his mother Mr Gandhi will not have any political secretary. Instead, there could be a panel to “advise and guide” the new Congress president.

The new-look Congress may also have a couple of vice-presidents, which may include former Lok Sabha Speaker Meira Kumar, Leader of the Opposition Ghulam Nabi Azad and former Delhi chief minister Sheila Dikshit.

As for allies, the generations next, which include Akhilesh Yadav of the Samajwadi Party and Tejashwi Yadav of the RJD, are close to Mr Gandhi.

To address speculation in the party that his elevation could mean the curtains down on a host of party veterans, Mr Gandhi has time and again promised a perfect “blend of the old and the new”.

Starting his political career in 2004 by winning Lok Sabha election from the family bastion of Amethi, Mr Gandhi became party general secretary in 2006. In 2013, he  became Congress vice-president.

The Congress-elect is the sixth generation of Gandhi-Nehru family to lead the party. The first was Motilal Nehru followed by Jawaharlal Nehru, Indira Gandhi, Rajiv Gandhi and  Sonia Gandhi, who has been the longest serving Congress president clocking in a reign of 19 years.