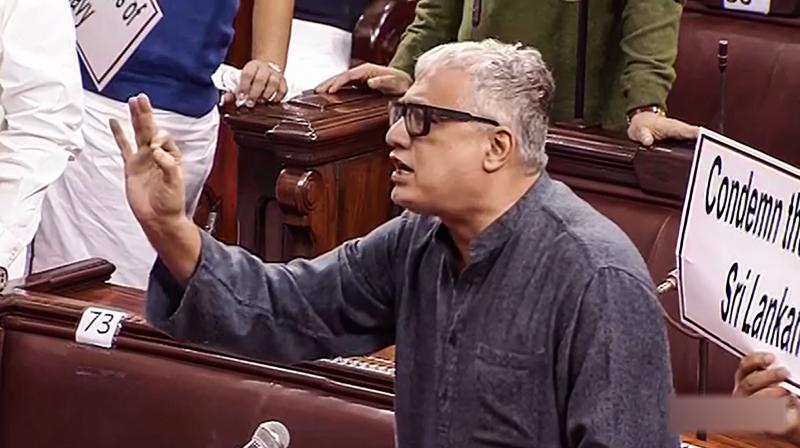 New Delhi: Heavy drama materialised in the second session of the Rajya Sabha on Tuesday as the government moved to pass the bill for a change in the electoral laws that, among other things, would enable the linking of Aadhaar numbers with voter ID cards. The bill had already been passed in the Lok Sabha on Monday amid fierce Opposition protests.

As the government moved the bill for passage, the Opposition members walked out of the House, alleging that a division on sending of the bill to a select committee had not been allowed. In the middle of this drama, Trinamul Congress MP Derek O’Brien was suspended from the Upper House for the remaining part of the ongoing Winter Session for “unruly behaviour” in the House on Tuesday. He had allegedly thrown the Rajya Sabha Rule Book towards the Chair during the discussion on the Election Laws (Amendment Bill) 2021. The incident took place after the Chair did not allow voting, citing disorder in the House. There are only two days of the session left: Parliament is due to be adjourned on Thursday.

Soon after his suspension, the TMC leader said that the last time he had got suspended from the Rajya Sabha was when the government was “bulldozing” the farm laws. He said: “We all know what happened after that. Today, suspended while protesting against BJP making a mockery of #Parliament and BULLDOZING #ElectionLawsBill2021. Hope this bill too will be repealed soon.”

In another tweet, he said: “After breaking every rule and precedent, the BJP has the gall to give lectures about the Rule Book. Irony just died. (Only two people at the funeral.) Guess who.” He also tweeted a five-minute video of his arguments in the House in which he is seen citing several rules to the Chair. This is the second time that members in the Upper House have been suspended in the Winter Session of Parliament.

Congress chief whip Jairam Ramesh said: “Today in the Rajya Sabha the Chair didn’t even allow a vote on the Opposition’s motion to send the Electoral Roll-Aadhaar (Link) Bill to a Select Committee. The Opposition walked out in protest. Like the farm bills, this bill too was passed undemocratically.”

Referring to Derek O'Brien throwing the rule book, Leader of the House Piyush Goyal said in the Rajya Sabha that the incident was not just an insult to the House, not just the Chair, but to the whole country. The bill was later passed through a voice vote after the entire Opposition, including the Congress, DMK, TMC, AAP, Shiv Sena, Left parties, RJD, Samajwadi Party and BSP, had staged a walkout accusing the Chair of not allowing a division. Deputy chairman Harivansh Narayan Singh did now allow a division, it was said, as several members were in the Well of the House.

Taking on the Opposition, law minister Kiren Rijiju said: “Only those who use bogus voters’ lists will oppose the bill. The country has well understood how necessary this electoral reform bill is.”

Earlier, both Zero Hour and Question Hour were once again washed out in the Rajya Sabha. The Opposition members have been demanding the revocation of the suspension of 12 members. On Tuesday, they raised the issue of Lakhimpur Kheri as well, and demanded that minister of state for home Ajay Mishra Teni be dropped from the council of ministers. The Opposition parties also took out a protest march from Parliament to Vijay Chowk demanding the immediate sacking of Ajay Mishra Teni. As the march started, Congress leader Rahul Gandhi said: “Teni will not be spared”. Later, speaking to the media, he said: “The Opposition has once again come together to raise the issue of Lakhimpur Kheri. We have repeatedly said that a minister’s son has murdered farmers using his jeep. A report has said that it is a conspiracy and not an isolated incident. The Prime Minister is not doing anything about the minister.” He added that neither the media nor the government was doing its job properly.