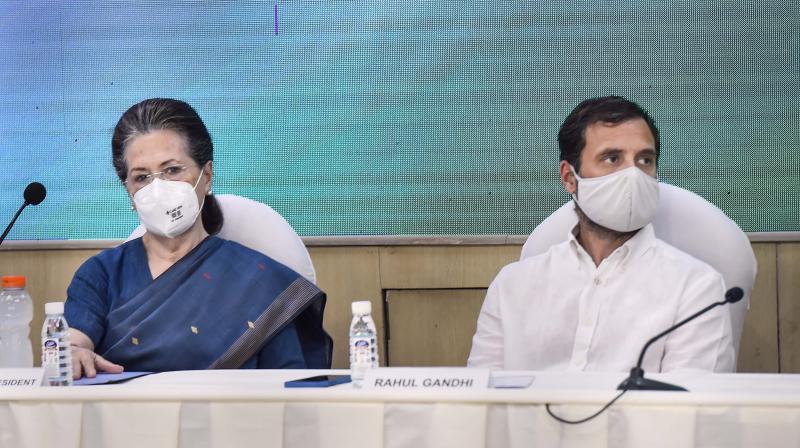 New Delhi: Congress president Sonia Gandhi, who chaired a five-hour-long meeting of the Congress Working Committee here on Sunday to ascertain the reasons for the party’s widespread losses in the recent Assembly polls, indicated -- as widely expected -- that the Gandhi family was ready to step down if the CWC so demanded. The CWC, again as expected, said it resolved to “fight the BJP under Sonia Gandhi’s leadership”. However, the internal election process is now going on and the date to elect a new Congress president has been set for August 20 this year. The meeting saw a freewheeling discussion on the reasons for the debacle faced by the party in all the five states.

The party has decided to hold another CWC meeting soon. This will pave way for a “Chintan Shivir”, or brainstorming session, after the remaining part of the Budget Session, which will begin on Monday This “Chintan Shivir” sometime in April will decide on the future course of the party and will focus on the remaining Assembly elections before the crucial Lok Sabha elections in 2024.

The high command had prepared well for the CWC meeting. The Delhi Congress leaders had been instructed to bring in large crowds outside the AICC headquarters where the CWC meeting was held. They shouted slogans in favour of the Gandhis, and were also holding placards and Congress flags. Rajasthan chief minister Ashok Gehlot held fort for the Gandhis and reached out to members of the G-23 group who are in the CWC seeking their help in rebuilding the party. This ensured that the status quo remains in the party.

Speaking to reporters, the party’s communications chief, Mr Randeep Singh Surjewala, read out the statement of the CWC. He further added: “Though internal elections are going on, the majority of the rank and file want Rahul Ji to the party president.”

The general secretaries in charge of the poll-bound states presented their reports to the CWC for the reasons for the party’s defeat. Mr Ghulam Nabi Azad said at the meeting that perhaps the then Punjab chief minister, Capt. Amarinder Singh, was not removed in proper fashion and hence the disastrous results in Punjab. Insiders claim that after Mr Azad’s assertion, Mrs Gandhi replied that it was her fault and she should have acted earlier on the issue. Some leaders in the CWC also said that accountability should be fixed about who was at fault in this debacle.

Interestingly, none of the state unit chiefs or the general secretaries in charge of the poll-bound states tendered their resignations because then Ms Priyanka Gandhi Vadra, who was in charge of UP, would also have had to resign. Several leaders also suggested that if instead of remaining in charge of Punjab, had Mr Harish Rawat been sent to Uttarakhand, the results in the hill state might have been different. Insiders claimed that some organisational changes will also happen soon.