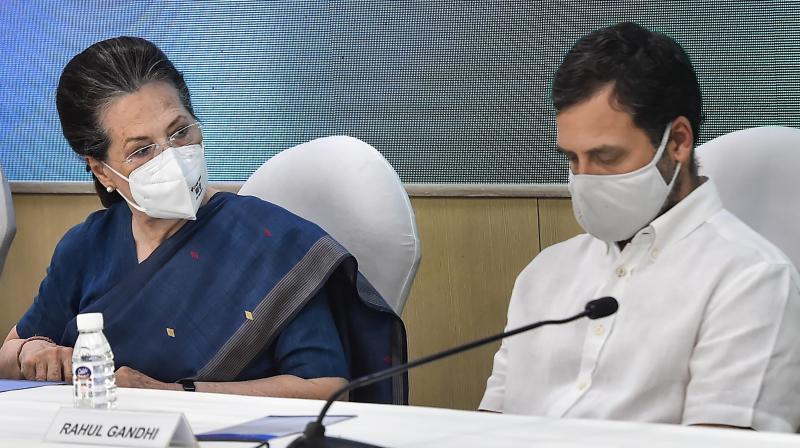 New Delhi: Under attack from within, Congress president Sonia Gandhi on Tuesday sought the resignations of all five state unit chiefs -- in Punjab, Uttar Pradesh, Uttarakhand, Goa and Manipur -- to facilitate reorganisation of the respective Pradesh Congress Committees. These states went to the polls in the past few weeks. This includes PCC chiefs Navjot Singh Sidhu from Punjab and Ganesh Godiyal from Uttarakhand, among others.

This move comes after several leaders started demanding responsibility directly from the Gandhi family members. After senior leader Kapil Sibal had said that the Gandhis should pave the way for somebody else to lead the party, on Tuesday senior leader Sandeep Dikshit reiterated this demand. He said that changes were immediately required and that the Congress’ interim president, Mrs Sonia Gandhi, instead of offering to resign, should have straightaway tendered her resignation if she was so inclined. He was even more harsh on the state in-charges and the coterie surrounding the high command. He added that strict action should be taken against the leaders under whom several elections have been lost.

The change-seekers, known as the G-23, are, meanwhile, expanding their base. A dinner meeting has been called by senior leader Ghulam Nabi Azad on Wednesday. This meeting will include many other leaders who were initially not a part of the change-seekers’ grouping earlier. The internal battles within the Congress have put the high command in a tight spot. It is the first time that the Congress leadership is under direct attack because of the successive election losses. The leadership of the Congress has been moving around within the Gandhi family only since 1998 till date.

The Congress establishment has struck back. Lok Sabha MP Manickam Tagore accused Kapil Sibal of speaking the language of the RSS and the BJP. He said: “Why the RSS and BJP wants the Nehru-Gandhis out of the leadership? Because without the Gandhis’ leadership, the Congress will be become the Janata Party. It is easy to kill the Congress then as it is easy to destroy the idea of India. Kapil Sibal knows it well, but why is he speaking the language of the RSS/BJP?”

Attacking Mr Sibal, Rajasthan chief minister Ashok Gehlot said: “Kapil Sibal isn’t a person from Congress culture. He’s a renowned advocate who entered the Congress. Sonia Ji and Rahul Ji have given him a lot of chances. It’s not expected from a person who doesn’t know the ABC of the Congress to give such statements.”