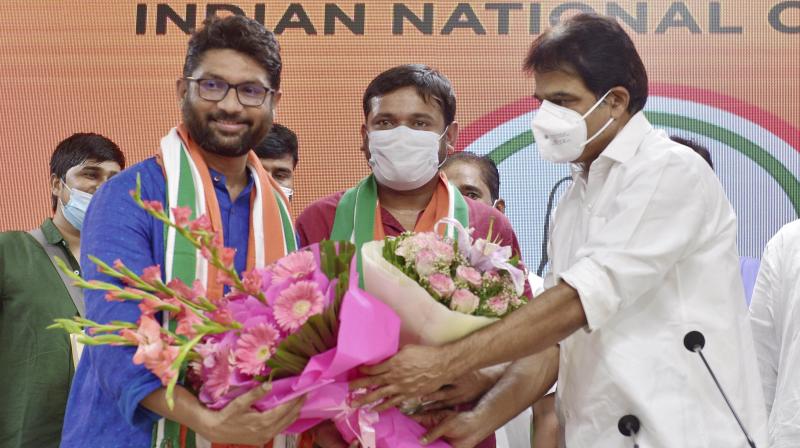 New Delhi: Communist Party of India (CPI) leader Kanhaiya Kumar joined the Congress on Tuesday in the presence of senior party leader Rahul Gandhi in New Delhi. Independent MLA from Gujarat's Vadgam constituency, Jignesh Mevani, also pledged support to the party, saying though he has not formally joined the Congress, he has joined the party's ideology.

Addressing a press conference Mr Kanhaiya Kumar said, "I am joining the Congress because it's not just a party, it's an idea. It's the country's oldest and most democratic party, and I am emphasising on 'democratic'... Not just me, but many think the country can't survive without Congress." He further added, "Congress Party is like a big ship. If it's saved, I believe many people's aspirations, Mahatma Gandhi's oneness, Bhagat Singh's courage, and B.R. Ambedkar's idea of equality will be protected, too. This is why I have joined it."

Mr Mevani said, "I could not join the Congress formally due to technical reasons. I am an Independent MLA, if I join a party, I may not continue as an MLA...I am part of the Congress ideologically but I will fight the upcoming Gujarat polls from the Congress symbol." He further added, "To save democracy and the idea of India, I have to be with a party that led the Independence struggle and dragged the British out of the country. This is why I am here with the Congress today."

Mr Kumar, a former student union leader of the Jawaharlal Nehru University (JNU), had joined the CPI before the 2019 Lok Sabha polls. He contested on a CPI ticket from Begusarai against BJP's Giriraj Singh but lost. Earlier he was president of the JNU Students Union and was jailed over alleged "anti-national slogans".

Mr Mevani is a Dalit legislator from Gujarat and has been espousing social causes in the state. His joining the party along with Mr Hardik Patel will give a young leadership to the state where the Congress has been out of power for long.

Welcoming Mr Kumar, Congress general secretary K.C. Venugopal said his party was looking forward to working with him and Mr Mevani to defeat "fascist forces" ruling this country. He also termed Mr Kanhaiya Kumar as a symbol of fighting for freedom of expression in the country.