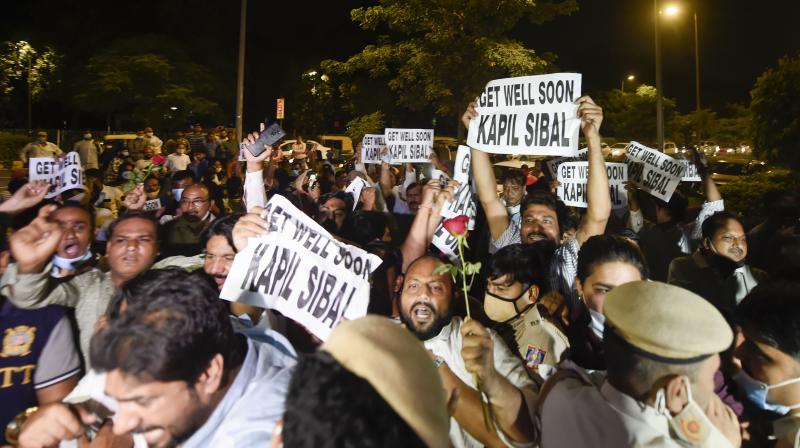 New Delhi: The change seekers, also known as the G-23, once again reached out to the Congress asking for a CWC meeting while making it clear that they were not going to leave the party but wanted changes from within. Former leader of Opposition Ghulam Nabi Azad on behalf of the change seekers is said to have written a letter to Congress president Sonia Gandhi once again, insisting that an emergency meeting of the CWC be convened over the recent goings on.

Speaking as a representative of the group, senior leader Kapil Sibal said, "In our party, there is no president. So we don't know who is making these decisions. We know and yet we don't know... We are G-23, definitely not Ji Huzoor-23. We will keep raising issues."

He also said it was ironic that those whom the party leadership kept close had left while others were still standing with them. "Ironically, those who were supposed to be close to the Central leadership have left them. I would urge those leaders who left to come back because the Congress is alone which can save the country," he said.

Commenting on the crisis in Punjab Congress, Mr Sibal said he wouldn't comment on Navjot Singh Sidhu or him being made the state president. "What's happening in Punjab, which is just 300 kilometres away from Pakistan border, and we know of the situation which has transpired in the state with regards to insurgency and the ISI," he said.

He stated that it is the Congress only that can secure the future of the country. "We won't leave the ideology of the party or go anywhere else. The Congress is the only party that can save this republic because the present dispensation is destroying the foundations of our republic." He also spoke about desertions from the party naming Sushmita Dev who went to TMC, Jitin Prasada who went to BJP, Jyotiraditya Scindhia who went to BJP among others. He asked, "Why are people leaving? Maybe we should see whether it is our fault? We have to immediately call a CWC, at least so a dialogue can take place. We won't leave the ideology of the party and go anywhere else.”

At the beginning of the press conference, Mr Sibal launched a scathing attack on the Central government, blaming it for failures on the border front, international policy and the visit of Prime Minister Narendra Modi to the US.

Instead of addressing the issues raised by the change seekers several Congress functionaries attack the letter writers.