Rahul queues up at SBI branch to exchange Rs 4000

‘There is no crorepati in the queue, only poor people are standing in queues for several hours,’ the Congress Vice-President said. 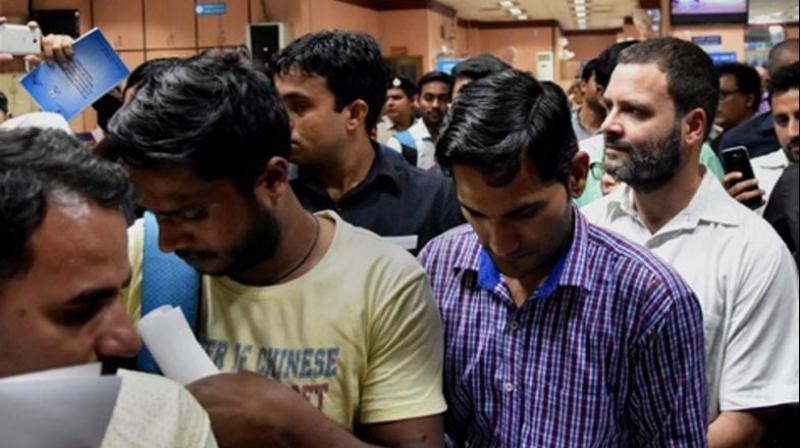 New Delhi: Congress vice-president Rahul Gandhi on Friday took a dig on Prime Minister Narendra Modi on the demonetisation issue, saying “Modiji will not understand the inconvenience being faced by the common man.”

Gandhi was seen waiting in a line in front of the SBI’s Parliament Street branch in the heart of the national capital.

An angry Gandhi said he has lined up in solidarity with the common people in the line. “I have come to exchange Rs 4,000. I am asking why were common people driven out of the bank?” he said.

Gandhi was seen waiting in a queue at a Parliament Street branch of State bank of India to get his Rs 4,000 currency notes exchanged.

He stood in the queue to wait for his turn as people since morning have been suffering to get new currency notes. The entire exercise took about an hour for Rahul.

“I have come to exchange Rs 4,000. I am asking why were common people driven out of the bank?” he said.

The Congress has now decided to make the issue of hardships being faced by the common man as charge against the government.

"There is no crorepati in the queue. Poor people are standing in queues for several hours. The government should be for poor people and not for just 15-20 persons," Gandhi said.

“My people are facing hardships that’s why I have come to join them. Which neither the government nor the media is understanding.” There was a deluge of people wanting to get selfies clicked with Rahul.

Earlier in the day, Congress spokesperson Anand Sharma hit out at the government for being ill prepared for this transition. He said that “if the currency has been printed why has it not reached the bank? This is an insensitive and arrogant government which has created a myth and is now getting carried away by its own propaganda.”

The Congress also alleged that the BJP on January 23, 2014 had opposed the withdrawal of currency notes from before 2005.

“Now there is financial chaos and anarchy in the country,” Sharma also added demanding that the government should make all NPAs public and come out with the list of defaulters above Rs 500 crores of bank loans.

The Congress also chided the government by asking that how many farmers carry a swipe machine? There are several sectors like farming and textile where cash transactions are in prevalence. The Congress is also waiting and watching as to how things pan themselves out. If the situation goes out of hand the Congress will once strategise how to corner the government on this issue.