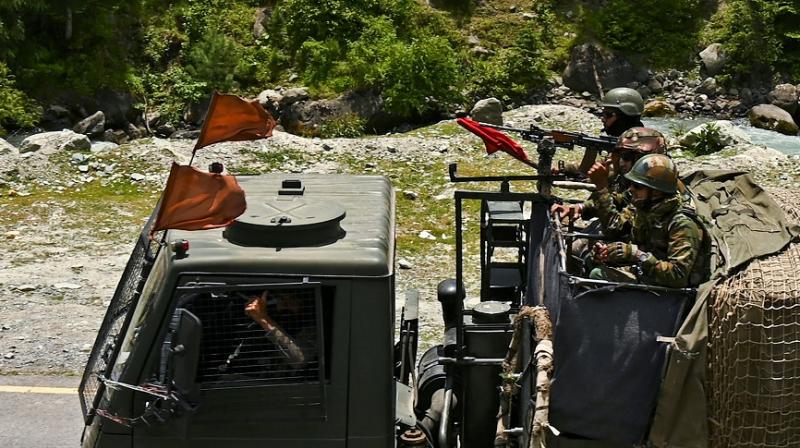 Indian army soldiers ride in a convoy along a highway leading towards Leh, bordering China, in Gagangir on 17 June 2020. (AFP)

In October last year a senior Indian security official on a visit to Ladakh met the General Officer Commanding (GOC) of the Indian Army’s 14 Corps. The Corps was raised in the aftermath of the Kargil war between India and Pakistan in 1999 and has its headquarters in Leh.

Today, 14 Corps under the India’s Northern Army Command is primarily tasked with maintaining the sanctity of the Line of Actual Control that divides Aksai Chin between India and China.

Aksai Chin went under Chinese occupation after 1962 war that dealt India a crushing blow and forced it to vacate large tracts of land and allowing the Chinese to hook up with its all-weather ally Pakistan through the illegally ceded territory of Shaksgam Valley in Pakistan Occupied Kashmir (PoK).

The Indian security official gave a detailed briefing to the Lieutenant General Harinder Singh, a former Director General of Military Intelligence, who took over as the GOC of 14 Corps late last year.

The Indian security official explained that the change of the status of Jammu & Kashmir had irked the Chinese. In the coming months they would up the ante and try and capture more land and shift the LAC deeper into Indian-held territory.

Several Indian security officials have confirmed that there was adequate credible intelligence of China’s intentions to up the ante in the Ladakh sector. The heights of the Galwan Valley overlooks a key road that winds its way to Daulet Beg Oldie, a strategic outpost that serves as a key military base for India.

By November/December 2019 the world was waking up to news of a spread of a deadly virus in Wuhan, China and all talk about the Chinese preparation to take over the Galwan Valley in Ladakh was forgotten. As winter set in, Indian troops settled in for business as usual.

But the events that unfolded on the night of June 15 raises several key questions.

Why did India’s top political, strategic and military leadership fail to anticipate and counter Chinese intentions to challenge and occupy Indian claims in Ladakh? How should India now counter a clear and present danger on its northern borders?

Did the newly-appointed Chief of Defence Staff, General Bipin Rawat, mislead the government? How did the plethora of official agencies set up to study China fail to predict a clear change in its India policy?

The brutal killing of Colonel Santosh Babu, the Commanding Officer of the 18th battalion of the Bihar Regiment and his men by the People’s Liberation Army (PLA) has now brought home the reality of Chinese intentions in Ladakh.

Reliable military and intelligence sources now say that the death toll of Indian soldiers is considerably higher and could be more than 40 soldiers. A Lieutenant Colonel and a Major are still missing and could be in Chinese captivity.

What is inexplicable is why Colonel Babu and his men went unarmed to remove a temporary Chinese structure that was being set up in a place known as Patrolling Point 14.

The standard procedure is to carry assault rifles slung at the back, pointing downwards, to signal peaceful intent, but to also serve as a deterrent to Chinese troops from taking any sudden hostile moves. Why was Colonel Babu and his men sent in unarmed to remove the Chinese infrastructure?

The Chinese plans that the Indian security official had briefed Lieutenant General Harinder Singh late last year continued to be implemented even as the world turned its attention to an emerging pandemic threat from China.

The Chinese build up was confirmed by other Indian intelligence agencies and reports were sent to Delhi. However, they were either missed or ignored allowing the Chinese to build up in the Galwan Valley through the winter.

The Chinese were upset with India’s position on rejecting its ambitious Belt Road Initiative (BRI) to connect global markets to China’s manufacturing industries. It led to a major stand-off between India and China in 2016 at the tri-junction with Bhutan, in the area known as Doklam.

In August last year when India abrogated Article 370, a constitutional provision that gave a special status to the state of Jammu and Kashmir, China responded with fury.

The Chinese claim large parts of Ladakh, eastern part of the erstwhile state of Jammu and Kashmir, and any change in status was bound to be viewed as a threat to China’s claims.

What is inexplicable is why did India fail to read tea leaves and China’s intentions to change status quo?

The rising political rhetoric in the aftermath of the “surgical strikes” in 2016 to “avenge” the killing of 19 soldiers in Uri and the air strike on Balakot, Pakistan in February 2019, as a response to the death of 40 Indian policemen in Pulwama, has pushed India into a tight corner. While political rhetoric is good for winning elections, it is not smart strategy.

A key recommendation was to appoint a lead agency for every border to ensure better coordination between different security agencies and accountability. For the Ladkah sector the Indo Tibetan Border Police (ITBP) was chosen as the lead agency.

It reports to the union Ministry of Home Affairs, which also commands the Intelligence Bureau and was the lead on abrogating Article 370 within months of Prime Minister Modi wining a historic landslide electoral victory in May 2019.

A 700 km border and Line of Actual Control that stretches from the Karakorum ranges to Himachal Pradesh is now manned jointly by the ITBP and the Indian Army.  The local ITBP sector headquarters holds a meeting every month with representatives from the intelligence agencies, army, air force, customs and the state police to review any intelligence on China relevant to their sector.

So why did this elaborate Indian security apparatus miss China moving troops nearly two army Divisions (about 9000-12000 men) into the area to occupy the Galwan Valley heights?

Every year the Ministry of Defence and Ministry of Home Affairs sit and jointly plan the patrolling schedule for the Ladakh sector. Decisions are taken on how many patrols will be sent by the army and ITBP separately and jointly. Each patrol carries GPS units to collect waypoints and record the areas that have been covered.

Clearly, this mechanism failed to anticipate China’s moves to consolidate its position in the Galwan Valley. India’s political and strategic leadership also failed to anticipate that the Chinese would violate bilateral agreements from 1993, 1996 and 2013 that specifically bars any change in status of the LAC by either side.

India’s military, starved of crucial funds for the last six years, has limited war fighting capabilities. At best, it is in a position to sustain a full-scale war for only 12 days after factoring in its current war wastage reserves. India will also have to keep in mind the possibility of a two-front war if Pakistan steps in, if things escalate quickly with China.