India has a law on epidemics that dates back to 1897 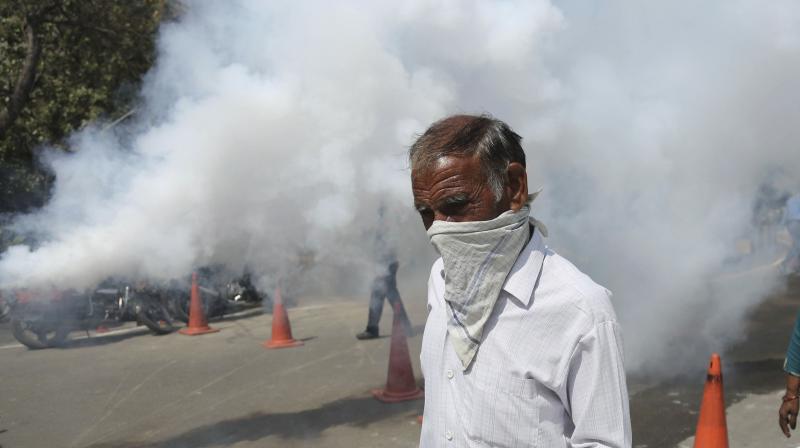 A man covers his face with a handkerchief as municipal workers spray disinfectant as a precautionary measure against COVID-19 outside at the Government Medical College in Jammu on March 19, 2020. (AP)

In 2003, as the Severe Acute Respiratory (SARS) virus dominated the headlines, Satish Chandra, a former Indian Foreign Service veteran who was then deputy national security adviser, was appalled by India’s unpreparedness to deal with a pandemic threat.

As Covid-19 rages through the world and has thousands infected, India seems to have escaped the brunt so far. It managed to quickly lock down its borders and started screening passengers at international airports fairly early. With positive detections of the virus at around 150 at last count, it seems to be in control. But Chandra’s initial efforts uncovered a host of issues that are yet to be addressed. His study also didn’t focus on several key issues that have a major bearing on India’s national interests.

Soon after the SARS virus became known, Chandra immediately called a meeting at the National Security Council Secretariat and marshalled the available resources to put together a paper on this. This was arguably the first Indian government study on how to deal with such kind of biological threats. “Basically, I was driven by anxieties on what could happen if the bird flu, which was transmitted between birds, shifted to humans. There were half a dozen such cases in China, and our rough estimate was that we could be looking at a global mortality rate of 60 per cent when a pandemic hit us,” Chandra told me over the phone.

For most Indian researchers studying pandemics, 1918 is a significant year. The Spanish flu started in the West and hit India at a time when there was no mass commercial air travel. Even then, nearly 20 million are estimated to have died from it in India. Chandra’s paper focused on early detection and isolation, as well as the general state of medical preparedness. “At that time our focus was on Delhi and we took some help from the state government headed by Shiela Dikshit and experts from the National Institute of Virology in Pune. But this was 2003, and we didn’t look at the corporate sector or the impact of such a pandemic on the global economy.”

The idea defence against any pandemic is a good vaccine research and development capability coupled with a robust pharmaceutical industry. In India, the key government institutes for vaccine production were shut down in January 2008 after a World Health Organisation report that they didn’t meet global statutory standards. These were revived later and the Central Research Institute in Kasauli, Himachal Pradesh, even ramped up some of its facilities in April 2016.

But this is clearly inadequate by all accounts. Chandra also flagged the point that the pharmaceutical industry in India had shifted to China to save on manufacturing costs. “The Advanced Pharmaceutical Industry (API) is hugely dependent on China. I have been pressing for shifting the industry back to India, even if it costs us because this is a strategic necessity,” Chandra said.

Today, the privately-owned Pune-based Serum Institute of India hopes to start human trials of a vaccine in six months. A firm in the United States has skipped the entire leg of animal testing and jumped to human trials to beat the virus. However, everyone agrees that a successful vaccine is still 18-20 months away, if at all. This means Covid-19 will be around for a while, even though social distancing -- where people are asked to stay at home and cities are locked down -- may slow it down.

In India, health is a major structural problem. The Central health budget in 2020 is at Rs 67,484 crores, that is less than one per cent of GDP. It was raised by a marginal 5.7 per cent from last year’s budget by the Narendra Modi government. On any given day, India’s public healthcare system struggles to deal with people who can’t afford expensive healthcare. The lack of a decent medical insurance scheme for large swathes of the population leaves them vulnerable to diseases and epidemics. Add the high levels of malnutrition, where, according to a 2017 study, it kills 62.8 per cent of children below five. Worse, a pandemic or an epidemic also means that this inadequate infrastructure will be the first one to be hit as first responders to a crisis. Doctors and nurses will be at high risk, and hospital beds will dry up. Intensive care units, ventilators and other critical medical equipment to keep people alive will be woefully inadequate, leading to high mortality if the epidemic spreads.

Therefore, the debate over carrying out more tests to detect Covid-19 cases is a delicate one. Should India expend its limited supply of test kits to chase every citizen, or hold on to go after most likely candidates. There are no easy answers yet.

Astonishingly, India has a one-page law with just four bare sections passed in 1897 to deal with such a crisis. As Abhimanyu Tewari, a practising Supreme Court lawyer has noted, this law was amended just once in in 1956 and is completely out of date. “There is a complete lack of pre-planning in its purview. The state and Central governments come into play only after an epidemic has broken out,” Tewari explained to me on mail.  “The law makes no effort to designate appropriate authorities or administrative infrastructure prior to an emergency. Since health is a state subject, there is no provision to coordinate a national effort in the law.” So if a state urgently needs ventilators that are available in another state, there is no legal provision to share or shift resources, he pointed out.

These are just basic requirements to deal with an epidemic as potent and widespread as Covid-19. There is no plan in place to also deal with the economic ramifications for such an event in India. While most corporates are now sending their workforce back home, for key sectors like the IT industry, there are major consequences since they also deal with sensitive data. For a vast majority of daily wagers, working from home is simply not an option. The 1857 law has no provisions for the private sector, which as Tewari pointed out, is an essential stakeholder in dealing with an epidemic of this magnitude.

The way forward is to set up a multi-disciplinary task force with objectives that can be implemented in a time-bound manner. Hopefully, when the next pandemic arrives, India can lead in process and substance in combating a global threat.