‘Rape accused Chinmayanand has been getting protection from the UP govt’

Former Union minister and Congress leader JITIN PRASADA, who was under house arrest, speaks with Ashhar Khan about the issue. 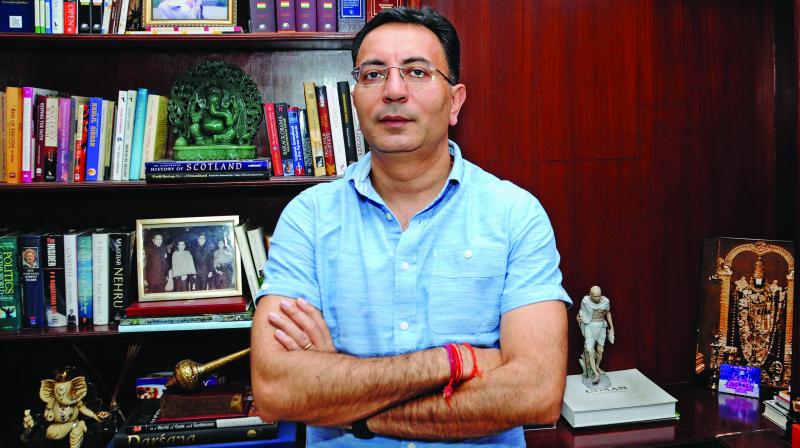 The Congress has announced a new team in Uttar Pradesh. Just days ago the party was stopped from carrying out a yatra against BJP leader Chinmayanand and in support of the rape victim in Uttar Pradesh. Former Union minister and Congress leader Jitin Prasada, who was under house arrest, speaks with ASHHAR KHAN about the issue.

You were placed under house arrest and the yatra was stopped. Could you elaborate on what the yatra was all about?
The yatra was specifically for the case in Shahjahanpur in Uttar Pradesh in which the accused Chinmayanand has been getting protection from the state government and has not been charged with the relevant charges. He is being let off lightly and the girl is also being persecuted. It is extremely unfair what is happening to the victim. So to highlight the grave injustice being done to the victim, a yatra had been planned from Shahjahanpur to Lucknow, crossing five districts. It was a completely peaceful yatra, not disturbing the local peace. But somehow, the UP government developed cold feet. I don’t know what it wants to hide what it wants to crush. I really do not know. But they did not give us permission at the eleventh hour. They should have conveyed it earlier. Then we wouldn’t have planned as such. Not only were the leaders who were supposed to participate that were detained, but also within a radius of 150 km at all roads and at all toll gates, all Congress leaders were stopped. It looked like as if we were the accused for raising the issue.

Did you reach out to senior authorities over the permission for the yatra?
Of course, we tried everything but this kind of thing is not done. Nobody wanted to speak to us and it was as if they all went underground. There was a total clampdown — from my house to people getting clamped down at the police lines in Shahjahanpur. Well, I really don’t know what the BJP government in the state wants. On one hand they are taking out a yatra on Mahatma Gandhi but so far as following his ideals are concerned, they are found wanting. They are practicing something that is completely different from what the Mahatma said.

We have seen two specific incidents, one of Chinmayanand and the other of Kuldeep Singh Sengar. Do you see that in cases where leaders of the BJP are involved the state government is going to sit on them?
It’s blatantly clear that wherever the BJP’s own men are involved I think the local administration has been given overriding powers and orders that they have to do everything to protect them. There are so many victims whose pleas are falling flat. Law and order in the state is in total disarray. People don’t know about this because only a few cases like those of Unnao and Shahajahanpur have made it to Delhi and adequate national coverage has been given. In spite of this national outrage, you can see how defiant and brazen the state government is: They are trying to block justice.

In both these cases the victims allege that they have been persecuted. Do you think this is a pattern?
Exactly. In this kind of state of affairs, the accused are enjoying all the perks and facilities and people who have been wronged are behind bars or in hospital. Now in the future, who will dare to go to the police against atrocities being committed? How will ordinary people seek justice when they know that the state government is going to crush them. People who are responsible for safety, security and upholding the rule of law are siding with the accused.

Do you think the Bulandshahr incident in which one police officer was also killed is part of the so-called lawlessness in the state?
Once again this is the naya Uttar Pradesh under BJP-Yogi rule where you see that a person in uniform is murdered in broad daylight. The government should have cracked down on these people and set an example that this kind of incident will not be tolerated and nobody would dare to do such a thing. Now when the perpetrators of this crime are garlanded when they come out on bail, you can very well imagine the boost given to their morale. It clearly shows that under this regime, if they have protection, they can get away with anything. My heart goes out to the family of the martyred police officer.

There are two years left for the Assembly elections in UP. Is the Congress preparing to give a good fight?
The Congress is one party that has never compromised with its principles and policies and we have taken a hit because we did not go for votes but we stood for what we believed in. Now that the people of the state have seen all the parties they will come back to the Congress as its ideals are for the state and the country. You have seen that a new state unit chief has been appointed. So now the party will come out with a roadmap for the state.

Will the Congress go in for a pre-poll alliance like it did the last time?
To reach the bigger goal, we have formed alliances in the past. At the moment, I can tell you that the Congress is preparing on its own in all the seats. With certainty I can tell you right now we are looking to overthrow the BJP government.

You have spoken about the perils of population explosion. The PM has also done the same.
Well, as far as the issue of population explosion goes, this has been on the agenda of the Congress for a long time. The recent was in the Panchmarhi conclave of the Congress almost 20 years back. Out of the eight sankalps, one of them was population control. This was the flagship program of the party — that every worker adopts 10 families to try and tell them about population control and adopt the two child norm. Population is a big problem for the country and by 2027, India will be the most populated country in the world. It will take at least another 50 years for the population of the country to stabilise. India can no longer bear the increase in population. It is our duty to make people aware and move them towards this cause so that the population stabilises. Resources are running out. The youth are feeling the squeeze, from admissions to jobs to space on the roads. The villages are feeling the pinch — that’s why people are migrating to cities and our cities are also overburdened. We should all rise above party lines for the national interest.

How will your political party take this issue forward?
The Congress already has this on its agenda, while the BJP did not have this on its manifesto. It’s just that the Prime Minister has said it. Well, UP and Bihar are number one as far as population explosion is concerned. The government of the day has to take responsibility to create awareness.