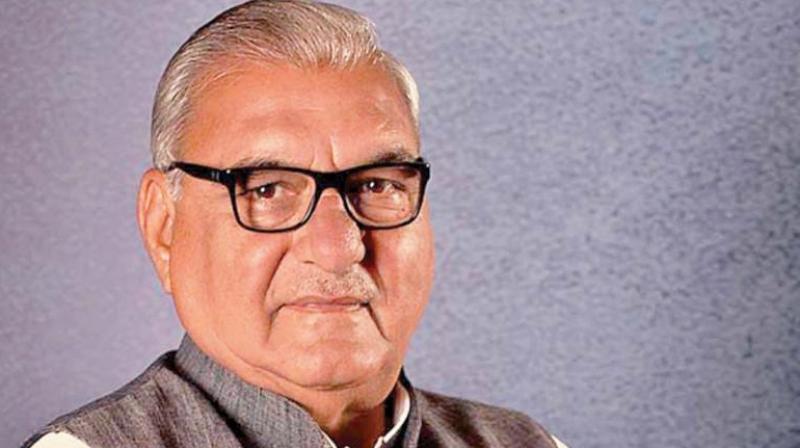 With Assembly elections in Haryana just a month away, the Congress is trying to get its house in order. Former chief minister and senior Congress leader BHUPINDER SINGH HOODA spoke with ASHHAR KHAN regarding the upcoming Assembly elections.

The Congress took a lot of time in changing the state leadership. Do you think this will adversely impact the party in the polls?

It was a decision taken by the Central leadership. All of us were working on the ground, trying to resolve the problems of the people — we were petitioning the state government regarding unsolved issues as the state government was constantly turning a blind eye. It is not that we have surfaced only during the elections. The Congress and its leaders have been fighting for the people of Haryana against a government that is asleep.

If the leaders of the Congress have been with the people then why did the BJP win all the 10 seats in the recently-concluded Lok Sabha elections in Haryana.

The BJP winning in Haryana in the Lok Sabha elections had nothing to do with the achievements or non-achievements of the BJP government in Haryana. It was because of the Narendra Modi wave and an overdose of pseudo-nationalism. The phenomenon was not limited to Haryana. Almost in all of North India barring one or two states, it was the same phenomenon. But in state Assembly elections the issues are very different from national elections. This needs to be kept in mind by all political observers. You must also realise that the Congress has a history of accomplishments in the state. I myself have been the chief minister for 10 years. You can see development for yourself in the state when the Congress government was in power. The people know and understand that the Congress can deliver, it has delivered and it will deliver.

How do you see the performance of the Manohar Lal Khattar government in the last five years?

This is a question that can best be answered by the people. But since you have asked the question I will give you a few statistical examples. In its manifesto for the state, the BJP had made 154 pre-poll promises, but you will be surprised to know that not even a single pre-poll promise has been fulfilled by the government. In the last five years, the per person debt in the state has gone up to `71,000. From 1966 till 2014, the per person debt stood at `30,000. Had we been in power, this figure would have reduced even more. They made so many promises to farmers, youth and the state government employees but none of them have been fulfilled. The Manohar Lal Khattar government will have to answer all these questions.

What will be the agenda of the Congress in this Assembly election?

We always have a positive agenda. That has always been our principle and policy. As I said earlier, the people of the state have seen the work done by the Congress during our government. Our record speaks for itself. During our government, it is a known fact and you can check it if you want — Haryana was number one in per capita income, per capita investment and in sports. Again, it’s a known fact that 22 of the 38 gold medals in the Commonwealth Games were won by athletes from Haryana. We have the best facilities in the state for sportspersons. When we formed the government, electricity was a major issue. With four thermal power plants and a nuclear power plant, we sorted the issue out. I have already announced that when the Congress government is formed in the state we will have a job for one member of every family in the state. Seventy five per cent jobs will be given to the residents of the state on the lines of Andhra Pradesh. We will waive off the loans of landless farmers. Those having up to two acres of land will get free electricity. Old age pension will be raised to `5,000 per person. There will be free travel for women in Haryana Roadways buses. Just wait for our full manifesto and then you will see.

The BJP is confident of its numbers in the state. The party feels that it will improve its tally from the last time.

Well, they can claim whatever they want. Who am I to stop them from claiming what they feel? We will form the next government. It will be for all to see. That is why the BJP is getting anxious as the time for polling comes close. We will have enough numbers on our own to form the government. If you go on the ground and make an assessment for yourself, you will realise the kind of angst present in the people against this government. Law and order in the state is in shambles. The unemployment rate is up from 2.8 per cent to 8.8 per cent. All these issues are a cause of major concern for the common people and the BJP is not addressing these issues.

There is a lot of infighting within the Congress in your state. Your previous state unit chief Ashok Tanwar is unhappy over his removal and so is Kiran Chaudhary who was replaced as CLP leader.

There is no infighting within the Congress. There are no differences. All of us have one common goal — to save Haryana from the present government. All of us are out on the field campaigning and listening to the woes of the people. We are one team — all of us together. I just met Kiran Chaudhary recently there is no difference. I reiterate. We all are one.

Will there be a problem in ticket distribution, as leaders will want some for their own people?

As you know, there is a process in our party regarding election tickets. We have a screening committee where candidates are shortlisted. Then there is the central election committee where the names are finalised. It is a very fair and time-tested process in the party. There will representation given to all sections of society and yes, emphasis will be given on the basis of winnability and loyalty to the party.

There was a lot of talk that the Congress will get into an alliance with the BSP?

No. Presently there is no discussion on an alliance with the BSP. We will contest all the 90 seats on our own. Our contest is only with the BJP. There is no other party apart from the Congress that can take on the BJP. Parties like INLD and its other offshoots have been strongly rejected by the people. The Congress and its leaders have been actively on the ground. Hence, we are aware of the problems of the people and we will work to solve them.

Your views on Article 370 and its abrogation? The BJP plans to make it a poll issue.

My views on this are well known there is nothing new in it. The Congress also is not against the abrogation they just said that it should have been done in a proper manner. The BJP is in the habit of raising emotive issues just to ensure that their failures are hidden under them.