‘Meira Kumar is a formidable candidate for the post of President’

There are almost 300 farmers languishing in the jails of MP, they should be released immediately, says Jyotiraditya Scindia. 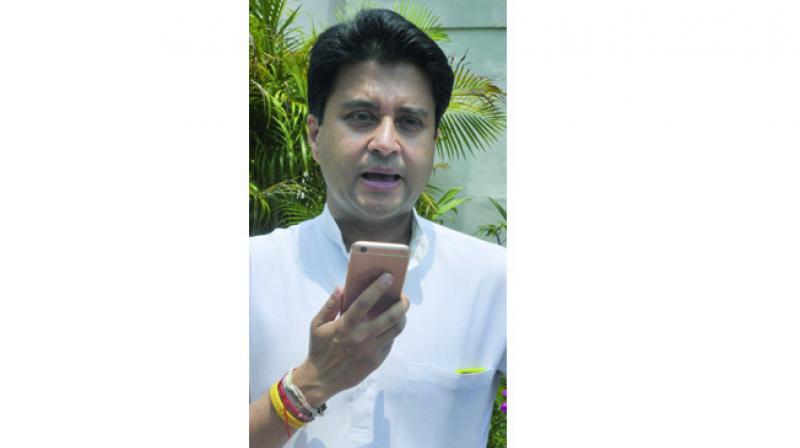 With the forthcoming presidential elections and the ongoing farmers agitation in various parts of the country dominating public dialogue, Congress’ senior leader and party’s chief whip in Lok Sabha, Jyotiraditya Scindia, spoke with Ashhar Khan on the two issues.

After much deliberation, the Opposition parties have finally suggested a presidential candidate. Do you think the choice was forced upon them to make it a dalit vs dalit election?
Well, I think every political party has a right to put forward its candidate for the election to the highest post in the country, which is of the President of India. Hence, 17 parties came forward and proposed the name of Meira Kumar as she holds an exemplary track record and has distinguished herself in multiple fields, whether as a former foreign service professional or a member of Parliament or a Union minister in successive governments or a Speaker of Lok Sabha.

She hails from a family that has always been at the forefront of our country’s service. She is a formidable candidate for the post of President. Now that the combined Opposition has put forward a candidate, and that too a formidable one, I hope all parties will support her.

There seems to be a perception that the Opposition unity was dented after both the BJP and the NDA announced its presidential nominee, more so because the Congress had been working on strengthening Opposition unity for a while now...
No, not at all! The Opposition stands united, as it has always been, and now we must wait for the election process to play itself out. We have always stood together, which was evident in the last couple of sessions of Parliament. I am sure you all have seen this for yourself, both inside and outside Parliament.

But Bihar chief minister Nitish Kumar and his party the Janata Dal (United) has taken a contrary stand to that of the entire Opposition on this issue. Your views?
Well, as I look at it, this is for the JDU and Mr Kumar to decide. We have been in conversation with him and we certainly hope that he will support a candidate who hails not only from his state but also has impeccable credentials to take over the highest position in the country.

This country’s agrarian sector runs on two engines — one is based on production, revenue and facts; the other is based on emotion, trust and on the fulfillment of promises. Both these engines today have been completely dismantled by the BJP government and that is why farmers are angry.

What initiatives does the Congress want the Madhya Pradesh government to take, particularly in the wake of the violence and police firing in Mandsaur in which a few farmers were also killed?
Well, we have articulated a set of demands that the Shivraj Chouhan government should immediately fulfil. We have demanded that all officers involved in the firing incident should have an FIR registered against them and immediate punishment should be given. Also, the government should outline the reasons due to which the firing took place.

There are almost 300 farmers languishing in the jails of MP, they should be released immediately. Incidentally, the state has the highest amount of VAT on petrol and diesel in the country and it should be at par with other states. The farmers should be paid in the mandi itself. Needless to add, all farm loans should be waived off and the Swaminathan Committee report should be implemented. These are our demands.

The BJP has labelled attempts by Congress vice-president Rahul Gandhi to visit Mandsaur post the killing of farmers as political tourism. Your thoughts?
The Congress Party and its leadership has always stood by people who have suffered, so that is why Mr Gandhi was going to Mandsaur. Even when I was going to Mandsaur, the state government arrested me. The MP government was busy trying to buy out farmers by raising the amount of compensation. Such is the mindset of the BJP when it comes to farmers. Instead of applying balm on the wounds of farmers, Mr Chouhan is using them for his political motives.

With the Congress governments in both Punjab and Karnataka announcing loan waivers for farmers, don’t you think it’s about time the BJP governments come up with a similar announcement in all states rather than doing it selectively in a few of them?
We have done that because we care for the farmers. Apart from that the Congress governments have taken concrete steps with regard to farmers, but what is extremely worrying is that the Central government has completely bypassed its responsibility and it, in fact, made a statement that they will not assist in any farm loan waiver. The MSP is set by the Central government. Farm loan waiver should normally be done by it. If Maharashtra and Uttar Pradesh — both BJP-ruled states — can offer a farm loan waiver scheme, why can’t MP do that? Is that not the right reaction to farmers demand?  Why is the Central government being a mute spectator when there are 12,000 suicides across the country every year?

How would the Congress  have handled the farmers’ crisis?
It was the Congress government in 2008 that waived off Rs 7,200 crore worth of farm loans in the country without looking at elections or political advantage. If you compare that to the BJP government the farmers from Tamil Nadu came and protested at Jantar Mantar and outside Parliament but there was not a single person from the Central government who met them.

The apathy of this government towards farmers and the farming community that is responsible for 17 per cent of GDP and is responsible for 53 per cent of employment is extremely worrying. Why is that when, in 2008-09 the world went through a financial crisis, India still posted a GDP growth of 8.5 per cent-9 per cent that fiscal year? The reason was the surplus agrarian income in rural parts of the country. And the reason behind the surplus agrarian income that fuelled the economy, which fuelled demand, which fuelled purchases, which increased disposable income, was the constant rise in the MSP prices during the Congress regime.