‘The BJP lost the plot as they kept asking for votes in the name of NRC, Article 370’

The Haryana Congress chief Kumari Selja speaks with Ashhar KHan on the party’s performance in the polls. 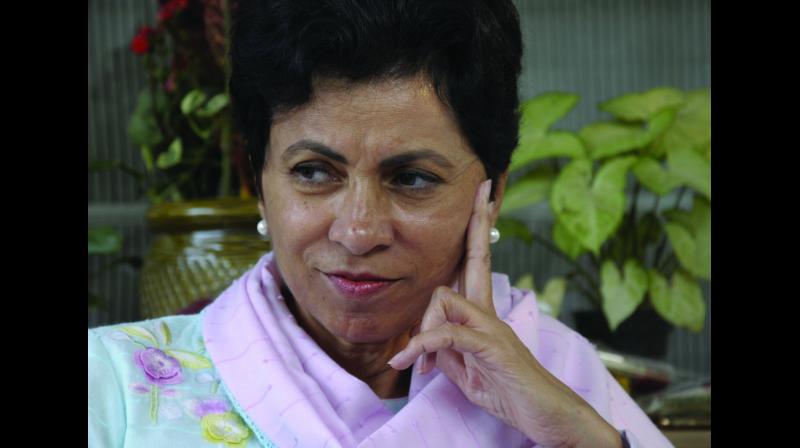 The results are out and the Congress has done much better than expected. Your comments?
One thing that is evident is that people of Haryana have totally and absolutely rejected the BJP government. It is another matter that in their lust for power they are trying to cling on to it. They tried to get Independent candidates by lifting them forcibly and resorting to every trick. This is horse trading.

On the performance of the Congress: Are you satisfied or do you think the party could have done much better?
Obviously, when you come so near you feel that, maybe, we could have done a little better. One thing of course is that we could have achieved much more in terms of seats, but you can see that when the counting was going on the BJP tried every trick in the book to ensure that Congress candidates lost. Regarding recounting of votes, where the margin was very slim, many of our candidates have told us that the BJP tried to intimidate them, misusing their power. The fact is that they are in government, but still they tried to do all that. Obviously, they did not see the writing on the wall.

Many of your candidates have lost with wafer-thin margins. Do you suspect any foul play?
I can name several constituencies, including Hathin, and even in Rewari they tried, but Captain Ajay Yadav and his son and the Congress workers all stood their ground. But in some places, yes, there was some foul play. I also got a call from some of our candidates, then our workers reached there. The BJP has tried this at several places and at some places we have lost with very slim margins. Of course, now we will have to see what we can do about that. But the BJP is so unscrupulous that they will resort to anything.

Was there any talk of your party joining with the JJP or Independents to keep the BJP out of power in the state?
Everybody knows the verdict of the people — it is anti-BJP. Otherwise the people of the state would have voted for them conclusively. Just a few months ago, in the Lok Sabha elections, the BJP was leading in 79 of the 90 Assembly segments. Today, they are reduced to 40, which is virtually half. It shows that the people of Haryana did not want them to form the government. Else they would have easily had a simple majority and formed the government. But the people of Haryana thought otherwise, and then let’s not forget that the majority of votes are anti-BJP. Whether they were Independents or smaller parties, everybody got votes that were against the BJP. All these parties went against the ideology of the BJP. So the people have voted against the BJP’s ideology and its government. It is because of this that the others should have got together and kept the BJP out of power as per the will of the people.

What were the real issues in this election? Before the polls your party said that the BJP is talking about the abrogation of Article 370 instead of real issues. What went wrong for the BJP?
The BJP lost the plot as they kept asking for votes in the name of the NRC, the abrogation of Article 370, etc. They did not even touch upon the issues that relate to the people of Haryana, such as huge unemployment amongst the youth — which happens to be the highest in the country. Also, there was rise in crime in the state, the plight of women, farmers’ distress, employees were unhappy. And, the poorer sections of the society, for five years they weren’t given any ration cards or BPL cards and the government kept telling them to go and register so that you get a house. Now for five years you kept asking poor people to keep registering — for how long? When will these dwellings be delivered? So people actually had no faith in the BJP. The BJP realised this and tried to use diversionary tactics of referring to the NRC and the abrogation of Article 370. They were things that people could not relate to.

The Congress did not do well in urban centres like Gurugram or Faridabad. Do you think the Congress could not connect in the urban centres?
I wouldn’t say that but there are a host of other factors that were responsible. In some places it could be that there were rebels and the candidates could not campaign well, for example. So there are always many factors that contribute to winning or not winning. It can’t be one specific issue.

There was infighting within the Congress. Some rebel candidates were put up. Did this impact the party?
The former state unit chief Ashok Tanwar was already out of the Congress. He had already resigned. We in the Congress put up a united front and everybody went into the polls in the right spirit.

Your former state unit chief Ashok Tanwar accused you all of selling tickets and protested outside the residence of the Congress president. Do you think all that diminished the party’s chances?
All this was uncalled for. A process is always in place in the Congress in every election. That is the way ticket distribution is done in our party. So that kind of demonstration outside the residence of Sonia Gandhi’s house was completely uncalled for. But then, ultimately, Congress workers went into the field and fought the elections extremely well.

What’s next for the party in Haryana? It seems that the BJP will form a government in the state.
It’s extremely unethical and immoral the way BJP is going about in terms of government formation. The way they are lifting MLAs — on one hand, they preach about high moral ground and then on the other hand, even without getting a clear mandate, they say it’s a historic win. What is so historic about this win? The fact is that people did not vote for you, people did not want you to form the government. Yet you are going ahead, and that too with horse trading to form the government. This is nothing but lust for power. We say that like-minded people and MLAs should come together. Else we will play the role of a constructive Opposition. While we are constructive as far as the development of the state is concerned, we will never ever fail on any forum, whether it is getting down to the streets or the Vidhan Sabha. We will never fail in raising issues that matter to the people of Haryana. The Congress on one hand wants overall development of the state but if we find that the government is not doing its job we will raise our voice.

The Congress also objected to Gopal Kanda, who is an accused in a criminal case and intends to give support to the BJP. What is your take?
The BJP has double standards. Earlier, he was untouchable for them but now that he got elected, they are wooing him. It is a typical characteristic of the BJP. They preach one thing and practice something completely opposite to that.

The results in Haryana and Maharashtra have brought cheer to the Congress after the drubbing it got in the Lok Sabha elections. Your comments?
Definitely it has bolstered the Congress and the Opposition. It has brought immense joy to the cadres, especially the fact that the party is fighting back and raising issues. That is resonating with the people. There is now faith returning to the people that the Congress is a solid alternative. We always try and do our best in elections and it’s always satisfying when the results are good.