At the interbank foreign exchange market, the local currency opened at 77.81 traded weaker, but directionless 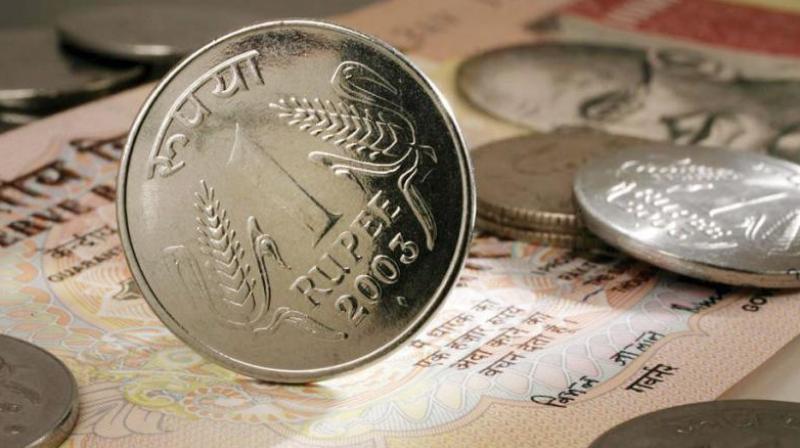 The dollar index, which gauges the greenback's strength against a basket of six currencies, rose 0.20 per cent to 103.43. — PTI

Mumbai: Amid rising crude oil prices and the Reserve Bank of India’s upward
revision of the inflation target, the rupee plunged to an all time low
of 77.85 against the dollar on Friday. Risk averse sentiments leading
to a strong sell off in the domestic equity markets, surging US yields
and a strong dollar also weighed on the domestic unit.

At the interbank foreign exchange market, the local currency opened at 77.81
traded weaker, but directionless, as risk sentiment got affected. The
local unit finally settled at its all-time low of 77.85, down 11 paise
over its previous close of 77.74. The rupee marked a new low as the
central bank did not intervene while importers rushed for dollars. The
equity market benchmarks ended sharply lower. NSE Nifty had lost 1.7
per cent while BSE Sensex had lost 1.84 per cent at the end of the
day.

Gaurang Somaiya, forex and bullion analyst at Motilal Oswal Financial
Services said, “Rupee hit its fresh all time low but in the last few
sessions has been very resilient and is consolidating in a narrow
range despite volatility in domestic and global equities and strength
in the dollar against its major crosses. Global crude oil prices have
been rallying thereby putting pressure on inflation and leading to
higher trade deficit. Dollar is getting support at lower levels ahead
of the US inflation number that will be released today and FOMC policy
statement that is scheduled next week. Expectation is that the Fed
could continue to raise rates and maintain its hawkish stance. We
expect the USD-INR (spot) to trade with a positive bias and is
gradually headed towards 78.50 levels. On the downside, 77.20 will
continue to act as an important support in the short term.”

Jateen Trivedi, vice-president research analyst at LKP Securities
said, “Rupee traded weak by 0.08 points at 77.85 compared to 77.77
down 0.10 per cent inching closer to 78 on the back of strong dollar
prices after China lockdown restriction raised yet again, sending
commodity prices lower and dollar prices higher. The rupee felt the
pressure as dollar prices trade above $103.50 and crude prices holding
above $120 in both Brent & Nymex. The rupee can be seen in the range
of 77.75-78 given the current situation, Core CPI data of the US will
give further cues for the range on rupee and dollar index.”

The dollar index, which gauges the greenback's strength against a
basket of six currencies, rose 0.20 per cent to 103.43. Brent crude
futures, the global oil benchmark, advanced 0.51 per cent to $123.70
per barrel. The basket of crude oil that India buys has hit a decade
high of $ 121 per barrel, but retail selling prices of petrol and
diesel continue to remain frozen.

The Indian basket on Thursday had touched $ 121.28, matching levels
seen in February/March 2012, according to data available from the oil
ministry's Petroleum Planning and Analysis Cell (PPAC).  Continuing
their selling spree, foreign institutional investors offloaded shares
worth a net Rs 3,973.95 crore on Friday, as per stock exchange data.
Dollar is getting support at lower levels ahead the Federal Open
Market Committee (FOMC) policy statement that is scheduled next week.
Expectation is that the Fed could continue to raise rates and maintain
its hawkish stance.