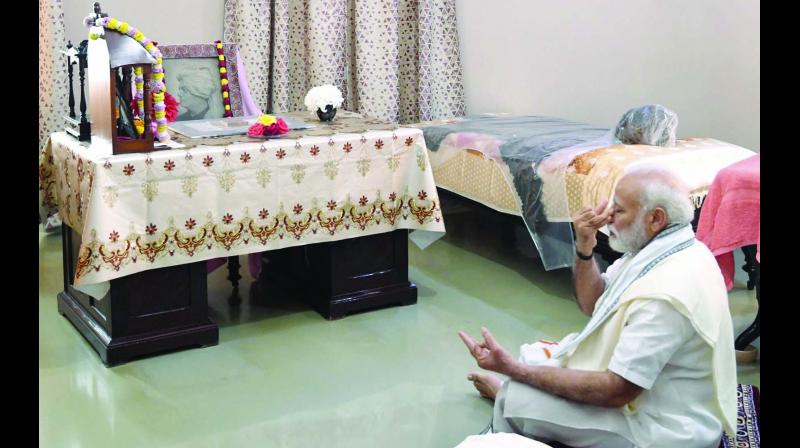 Prime Minister Narendra Modi meditates as he pays tribute to Swami Vivekananda on his 157th birth anniversary at Belur Math in Howrah on Sunday. (Photo: PTI)

Kolkata: Irked by the continuous protests against the Citizenship Amendment Act (CAA) across Kolkata even on the second and final day of his official visit to West Bengal, Prime Minister Narendra Modi blamed the Opposition parties for misguiding the youth with “rumours” about the CAA in his veiled attack on CM Mamata Banerjee for joining her party’s protests after meeting him twice on Saturday evening.

“A lot of discussions have been underway on the CAA among the youth across the country. What is this? Why was it necessary for implementation? Different types of people have filled the young minds with lots of questions,” Mr Modi told students Sunday morning on Swami Vivekananda’s birth anniversary at Belur Math, the headquarters of the Ramakrishna Mission, after spending the night and attending a prayer there.

Reiterating that the CAA would only give citizenship rights and not snatch it away from people, the PM said: “Many youth are aware of it. But there are many others who have been victims of illusion and rumours. It is our responsibility to help them to understand it and also satisfy them. You understand it. But those who play politics on it are not ready to understand what you do.”

He added: “They are mature. Still they do not want to understand it. Despite so much clarity, some people for their political interests have been spreading rumours on the CAA.” Stung by Mr Modi’s jibe, the Trinamul Congress supremo skipped the 150th anniversary celebrations of Kolkata Port Trust at Netaji Indoor Stadium, where she had earlier agreed to share the dais with the PM.

The PM was also shown black flags and faced slogans like “Go Back Modi” by protesters at around 11 am as he was entering the venue in his convoy after cruising across the Hooghly from Belur Math. Two persons were arrested by the police. Taking the opportunity, Mr Modi taunted Ms Banerjee about “cut-money” and “syndicate” before expressing the wish that God would bless her with wisdom!

Announcing the renaming of Kolkata Port as Syama Prasad Mukerjee Port, the PM observed: “If the state government allows Ayushman Yojana and PM Kishan Samman Nidhi here, though I do not know whether it will do so or not, the people will get benefits without any deviation, cut and syndicate. But why would someone implement it when it reaches directly, no cut comes, no syndicate exists?”

He added: “It will always pain my heart. So I wish and I pray to God to bless wisdom on policymakers so that the people of Bengal get the benefits of Ayushman Yojana and Kishan Samman Nidhi. I am well aware of the mood of the people of Bengal. They have so much power that no one would be able to deprive them of these schemes.”