India   All India  20 Jan 2020  When Nani argued against cause of Bhopal gas leak victims
India, All India

When Nani argued against cause of Bhopal gas leak victims

Methyl Isocyanate leak had occurred from the factory and thousands were maimed and mauled and continue to suffer in its aftermath. 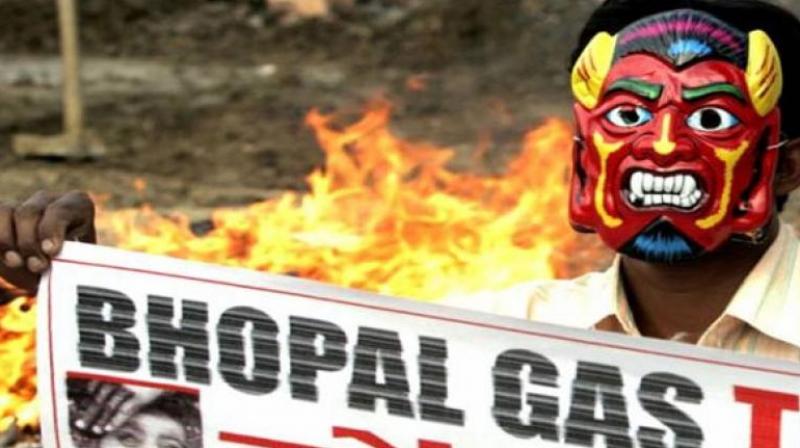 Nani was a courtroom genius, as Senior Advocates Soli Sorabjee and Arvind P Datar called it.

While the world may be celebrating the centenary of Nanabhoy (Nani) Palkhivala on Jan 16, 2020 would it be sacrilege or blasphemy, to allude to his affidavit dated December 18, 1985, filed before the US Court, “ In support of Defendant’s Motion for Dismissal on Forum Non Conveniens Grounds”. It was in the context of the claim filed for and on behalf of the victims of the Bhopal Gas Disaster. It was in ‘support’ of the motion moved by Union Carbide, the company that owned the plant in Bhopal, to throw out the claim in USA to India. Methyl Isocyanate leak had occurred from the factory and thousands were maimed and mauled and continue to suffer in its aftermath.

Nani was a courtroom genius, as Senior Advocates Soli Sorabjee and Arvind P Datar called it. Born with a stammer, he overcame the handicap, with marbles in the mouth and kept debating in school and college. Destined to become a lawyer, he lost out on becoming an English lecturer to a lady. Nani did not forget to treat the lady, year on year, to repay India’s debt to her in beating Nani at the tape. What if? It boggles the mind.

He was a champion of civil liberties. He had argued the most important cases before the Supreme Court to lay down the law in most of the epochal constitutional issues. None more seminal than Kesavanand Bharati, where he succeeded in saving the Constitution and India thereby, from being ‘overhauled’ by Parliament, in the name of amending powers. Nani, literally, singlehandedly, persuaded the top court bench of 13 judges, a historical high, never again repeated till date, to hold the hand of our representatives from transgressing into the domain of Basic Structure of the Constitution. The Constitution and India was saved and continues to be protected by the Holy Spirit of Kesvananda.  Nani was known to Chennai, then Madras, when his famed Kanga & Palkhivala Treatise on Income Tax law was accused of being in the plagiarist genre. The Madras High Court threw out the challenge, made at the instance of AC Sampath Iyengar. But, Chennai knew him better as a critique of the Annual Budgets, with his brilliant expositions, at the then Abbotsbury Mahal and/or Loyala College, Ramakrishna Mission School grounds, Madras University Centenary Auditorium.

Nani@100 is an occasion to celebrate the life and times of the man. But, we cannot simply make it a eulogy theme, which Nani himself would have disliked. He would have loved to be at the centre of it all, to raise such inconvenient questions, as an historical perspective while analysing his legacy. Just as Kesvananda or Minerva Mills cases, were a part of his legacy, this affidavit is also a part of it. Why then should we fight shy of talking of it. This is surely not talking ill of the dead. Just a bit of stocktaking. Read these averments in the affidavit, “The Indian judiciary is wholly competent to deal with any dispute in any field of law, and has, in the 35 years of the history of our Republic, ably dealt with far more complex issues than those arising from the gas plant disaster at Bhopal. The Supreme Court of India, in the range of its power and the sweep of its jurisdiction, is without a rival in human history. Its writ runs over more than one-seventh of the human race.”

Author is practicing advocate in the Madras High Court

It has jurisdiction in every domain of the law-constitutional and ordinary, civil and criminal, social .and industrial….. There is no injustice which the Supreme Court is powerless to redress. The charge that the Indian judiciary is not “innovative” is baseless. To say that our Supreme Court is super-innovative would be closer to truth.”

Is there anything offensive or deriding of India or its judiciary? It is the opposite. He praises our apex court sky high, as he knew its contours better than anyone else.  He was possibly the best informed. What of this concluding content?  “The ends of justice often require the truth to be faced squarely and stated bluntly. Indians courts are inadequate instruments for procuring the fabulous damages which American juries are prone to award. It is a fortuitous circumstance but not without significance that $9.5 billion which I believe represents the total aid given by the USA to the Indian republic over the last 35 years is exceeded by the aggregate claims made on behalf of the Bhopal victims”.

It is these last few lines in the sworn affidavit that seem so distant to the values that Nani stood for, all his life. These few lines appear to take away his legal argument on the supreme efficacy of the Supreme Court. Where was the need for him to advert to the financial aid provided by USA as a nation vis a vis the claims made against one corporate based in the US? Was it relevant or necessary? Except to prejudice the mind of the court.

The Nani affidavit was not supportive of the cause of We The People, surely, not of the victims, who wanted to pursue the remedy in US, where the reliefs would have been speedier and far higher. Nani himself conceded it in the affidavit. The ultimate decision of the US Court was not based on this affidavit of Nani alone. To be fair to the victims, in Pike vs The Indian Hotels Company dt.19th Dec,2013,  the UK High Court upheld the claim of two victims of 26/11 Mumbai carnage in England, on the ground that a civil suit for damages in Mumbai may have taken a minimum of 15 years, even in the first, with further rounds permissible.

Nani, the financial wizard inexorably comes out. It would be unfair to read it shorn of context. Nani was always, “honest, blunt and truthful’ as Justice VR Krishna Iyer said. If he tripped, that shows he too was human. He never minced words, even as Ambassador in US. “The ends of justice often require the truth to be faced squarely and stated bluntly.” He was being He. What pray then could be the charge?

(Author is practicing advocate in the Madras High Court)