Gandhi said that a good leader is one who listens to the people he represents and makes their desires his goals. 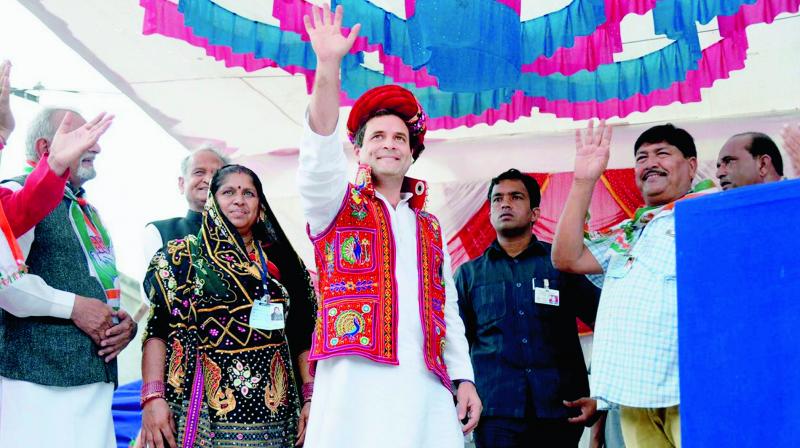 New Delhi: Taking a leaf out of Prime Minister Narendra Modi’s handbook, Congress vice-president Rahul Gandhi on Tuesday tried to evoke “Gujarati pride” during his visit to the state. On his second day in Gujarat, the Congress scion said that Gujarat’s government will be “by Gujaratis” if the Congress is voted to power in the coming Assembly polls.

As the race for Gujarat heats up, Mr Gandhi has taken it upon himself to lead the charge against the formidable duo of Prime Minister Modi and BJP president Amit Shah. At a public meeting in Palanpur, he said that only one man was shining in Gujarat, while all others have been rendered insignificant, adding that if the Congress was voted to power, his party’s government would function from Gujarat and not on orders from Delhi.

Claiming that youth leaders were being suppressed in the state, he said, “Here you toil hard and sweat it out... but it is only one man who takes the credit in Gujarat”.

“What is your strength?... Strength of Gujarati small businessman who run the economy of Belgium... small artisans of Gujarat... you run Belgium... but your voice is not heard here,” he claimed.

Taking up the issue of demonetisation, Mr Gandhi said, “They have no space in heart for the weak and poor sections of the society… but they open all the doors for the rich people of the society”.

Mr Gandhi said that a good leader is one who listens to the people he represents and makes their desires his goals. But in Gujarat, the common man’s voice is not being heard. It is being suppressed, he said.

The Congress vice-president, who has been eyeing the support of the Patidar community, also campaigned in Patidar-dominated areas of the poll-bound state. The party is hoping to get the support of this decisive vote bank during the polls.

On Monday, the first day of his three-day visit to the state, Mr Gandhi was greeted by Hardik Patel, leader of the Patel quota agitation through a tweet. Mr Patel had earlier hinted that he may consider supporting the Congress in the Assembly polls to achieve the goal of reservation for the Patel community under OBC quota.

Meanwhile, as Mr Gandhi made an all-out attempt to woo the Patidar voters, the BJP government in the state called a meeting of all Patel groups agitating for reservation in government jobs and colleges.

Mr Gandhi began his three-day roadshow on Monday by offering prayers at Dwarkadhish temple in Dwarka and then addressed party workers and villagers in Bhatia village in Jamnagar district.

He visited several villages in the politically important Saurashtra region, where he interacted with locals on issues like corruption, unemployment, education and development.