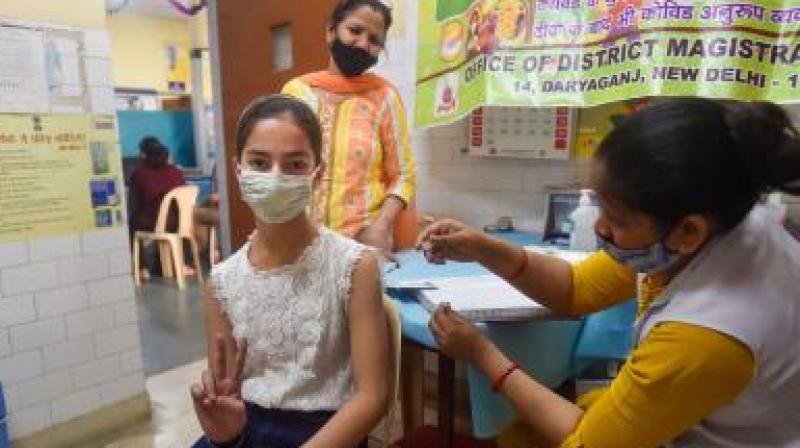 A healthcare worker administers a dose of the Covid-19 preventive vaccine to a student in the age group of 12 to 14 years, at a vaccination centre, in New Delhi. (Photo: PTI)

The last two and a half years of the Covid-19 pandemic has been challenging for our entire society. However, as is the case with every epidemic and pandemic, which either fully ends or become endemic, the Covid-19 in India has also, arguably, transitioned to the endemic stage. With the experience of the last 29 months, many have started to argue that health in India has become a political priority.

The fact is that while health has got a lot of attention in the pandemic period — going by the poor status of health services in a majority of Indian states and poor health indices — there is a real need for health to continue to be a sustained government priority in India, for long. A way to ensure that is people starting to hold their elected leaders and the governments at all levels -- local, state and Central -- accountable. If the decision of citizens on whom to vote for is based upon what the elected representatives and governments have done for health in the previous five years, that can sustain health as political priority. Whether that will happen and to what extent is difficult to predict. However, before we all get busy with other pressing daily challenges, it is time to discuss what could be done for stronger health services in India.

First, there is a need for re-examination of the role of federalism in health policy. Health is a state subject in India, but there are many Central policies and schemes that deal with various aspects of public health. The pandemic saw several conflicts and disputes between the Central and state governments, with allegations that the Centre was encroaching upon the jurisdiction of the states. Alongside, the Union government often washes its hands off for the poor status of health services in the states because it is a state subject. It is time to deliberate in what ways cooperative federalism can be strengthened in the matter of public health? What could be an ideal balance between these two? Are "right to health" laws required in all states? Some of these matters were discussed in the governing council meeting of the Niti Aayog recently, but there is a need to have a serious follow-up discussion both in the Lok Sabha and the state Assemblies.

Second — in the post-pandemic period — health workers’ availability and distribution and increased health budget allocations should be the priorities. Recently, the government stated in Parliament that India now has sufficient doctors per 1,000 population. Though that may be true, however, the key challenge here is inequitable distribution. A majority of doctors in India are in metropolitan cities and urban areas. Then, while the aggregate number could be enough, 90 per cent of doctors are in the private sector and only one in 10 doctors in the government sector. These have implications on the capacity of the government sector to deliver health services. Clearly, having trained doctors is not enough, what matters is whether healthcare services are available and accessible for ordinary people. To ensure that, it is necessary that the health budget allocations should be increased by both state and Union governments, and doctors and medical staff are posted equitably in rural areas and the cities.

Third, the disease surveillance systems and public health measures need to be sustained. Following the Covid-19 pandemic, there have been some concrete measures to strengthen India’s disease surveillance system and public health testing capacity. It was some of these efforts which resulted in the early detection of many new viruses in Indian states as well as that of the monkeypox cases. However, the disease data collection, analyses, sharing and use of health by the government remains a challenge and needs rapid improvement.

Fourth, malnutrition and anemia in women and children continue to be challenges. The National Family Health Survey 5 (NFHS-5) shows that despite decades of implementation of a range of schemes for women and children, the rates of malnutrition and anemia remain high, and the rate of improvement is very low. It clearly demands urgent intervention to revive the efforts to tackle anemia and bridge the gaps in other nutrition policies.

Fifth, the Mental Health and Post and Long Covid are two urgent post- pandemic health issues to be catered to. Mental health was a challenge even before the pandemic. The National Mental Health Survey 2015-16 had reported that one in every eight persons in India was in the need of one or other form of mental health services. However, the issue was not recognised because of the stigma associated with it. After the Covid-19 pandemic, the number of mental health concerns have increased. Fortunately, in the Covid period, the stigma associated with mental health services has reduced and people are more willing to seek care. The time is also of rapid expansion of mental health services. An estimated one in every 10 Covid-affected people is likely to have post and long-term symptoms. Health services also need attention from the government for the post and Long Covid and specially through primary healthcare systems.

Sixth, India being a pharmacy to the world, must assume responsibility and the government has to step up its investments on research and development on vaccines and therapeutics. This has become especially important for emerging and re-emerging diseases and many neglected tropical diseases, which affect the low- and middle-income countries and are not a research priority for high income countries.

Seventh, these needs to be supplemented by additional steps. The health policy measures announced in recent months and years need to be better implemented. The recently announced public health and management cadre and the Indian public health standards should be adopted by all Indian states. There is a need for better provision of health services by urban bodies, stronger primary healthcare services in both rural and urban settings and the need for innovations and new initiatives for health services.

In the last 15 years or so, the Union government in India has announced a multitude of health schemes, including the National Rural Health Mission (2005), National Urban Health Mission (2013), Ayushman Bharat Programme (2018) and the National Digital Health Mission and Health Infrastructure Mission (2021), among others. We keep hearing that the government is repackaging old schemes as new programmes. However, the seventy-fifth year of Independence is time that more attention is given to the effective implementation of the already running health schemes, at the ground level. That will prepare India for a much healthier nation for the centenary celebration of Independence.