Nilanjan Mukhopadhyay
The writer is an author and journalist based in Delhi-NCR. His latest book is 'The Demolition and the Verdict: Ayodhya and the Project to Reconfigure India', and he’s also the author of 'Narendra Modi: The Man, The Times'. He tweets at @NilanjanUdwin. 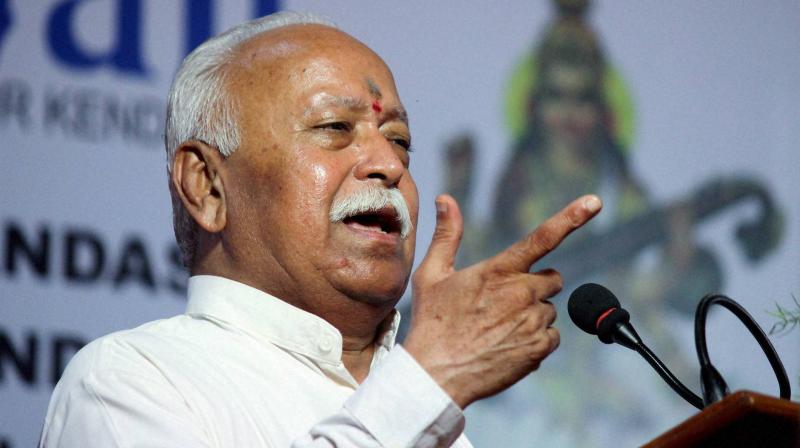 At the outset, it’s important to examine why the meeting between the sarsanghchalak of the Rashtriya Swayamsevak Sangh and a group of five members of the Muslim intelligentsia was held after much hesitation.

Tentativeness, because the “request” for this interaction was made in the wake of the controversy generated by incendiary statements against Prophet Mohammed by BJP spokesperson Nupur Sharma. That controversy in May-June, it may be recalled, dominated the headlines, whipped up communal passions and had a diplomatic fallout, forcing the government and the ruling party to act by suspending Ms Sharma. It led to a hostile response from hardliners among Hindutva votaries. Gradual de-escalation of social hostilities was imperative but this couldn’t be done immediately, by setting up a meeting with Muslims, for fear of erosion in political support.

The RSS therefore took a while before acquiescing to the request and calling the group for a conversation at its office in Delhi’s Jhandewalan area. For the same reasons, the RSS, normally never wary of publicising its activities, chose to put a lid on the interaction for long. It was after close to a month that the information of this meeting was secured by some media people. The five Muslim men — former Delhi lieutenant-governor Najeeb Jung, former chief election commissioner S.Y. Quraishi, former AMU vice-chancellor Lt. Gen. Zameer Uddin Shah (Retd), journalist and political leader Shahid Siddiqui and businessman Saeed Shervani —  too didn’t rush to the media. They chose to speak only after news of the interaction became public.

Does this suggest that both groups were “apprehensive” of a backlash in the event of details of the meeting becoming public? As a result, was it possibly mutually decided to “break” the news gingerly? While a clear answer to the two questions will remain elusive, the sequence of events suggests that this was indeed so. But on the flip side, if this process of “dialogue” has to have any future in a socially corroded India and help to smoothen inter-community ties, the process cannot but be done openly. Being secretive on the most disruptive issue — at par footing for Muslims — will hardly serve any purpose.

In any case, Mr Bhagwat, as well as those who have taken the initiative, and any others who may like to follow suit —  the imam of the mosque visited by the RSS chief, for instance — will not find it easy to get their personal or collective views accepted by wider sections within their own communities or political fraternities. This makes transparency of the process absolutely essential. While Mr Bhagwat, at least, has the cushion of the office he holds, the five notables don’t “represent” even the entire Muslims intelligentsia, which in turn too can’t claim to be ambassadors of the entire community that is wrongly considered homogenous. The RSS chief too has a past in making statements that haven’t been followed up by the rank and file of the fraternity, giving rise to allegations that his interventions were duplicitous.

However, in a democracy, it is essential to unswervingly pursue dialogue especially on issues that are the cause of frequent social disruption. This couldn’t be truer of holding dialogues or conversations between people with different religious faiths. The current government can be faulted for ignoring the task of forging a consensus of even issues that are not particularly contentious. There is little relevance of religious leaders sitting together and finding areas of common concern and commonality on matters related to faith. That all religions preach the same moral values is a cliché, even though adherers of monotheistic religions have major disagreements with others.

The schism between Hindus and Muslims has deepened in India since 2014. This is not because of religion and religious philosophies, but for reasons of politics over religion and religious identity, besides the use of religion in politics. It must be recognised, particularly by those desiring to enter into a dialogue process with Mr Bhagwat or with, as reportedly decided at this meeting’s end, the group of RSS-chosen interlocutors, that these individuals carry the burden of a century-old ideology that makes them bound to a set of definitions — most importantly about the nation, nationhood and citizenship.

The RSS will become a centenarian in 2025 and no one can ignore the philosophy of cultural nationalism as being integral to its formation and existence. India is also barely 18 months away from the campaign for the next parliamentary elections kickstarting. The BJP has greatly benefited in the past two elections by the veiled use of its Hindutva deck in which the Muslim “card” is important. This remains and is evident, be it in the excessive use of symbolic “weapons” of destruction like the bulldozer, or repressive laws.

The stance on the core issues of nation and nationhood and whether or not the country is a Hindu Rashtra or not —  the Sangh Parivar, that includes the whole of the Union government — is an evolved and unambiguous position and dilution of this is unlikely, especially with the polls around.

The “settled” position of the Hindutva groups on these issues acted as an insurmountable hurdle during every effort to fashion a harmonious resolution on any point of discord.

In fact, when opposition to the Citizenship Amendment Act reached its peak in early 2020, the government and its political affiliates showed no inclination to consider the objections of secular activists and Muslim protesters alike. These issues are just the proverbial tip of the iceberg of divergences. However, this must act as the starting point of any dialogue because the three matters — nation, nationhood and citizenship — were those that the Centre emphasised on immediately after securing its second successive mandate in 2019.

Although the five Muslim gentlemen have no “mandate” from the community, their anxiety has to be recognised because it is shared by most of their own although many disagree with their method. But the RSS and Prime Minister Narendra Modi (a meeting has been sought with him too) have the liberty to widen the field and invite more representative groups for a dialogue. In July, at the BJP’s national executive meeting, the PM asked party workers to reach out to socially and economically deprived sections of the community —  tagged as “Pasmanda Muslims”. The call for a dialogue has reached the highest two persons in this government as well and it’s for them to demonstrate the sincerity of their past utterances.