Invest in the aircraft of tomorrow

Mr Modi has developed a rapport with Mr Macron and Ms Merkel; it would make economic and strategic sense for India to partner Europe. 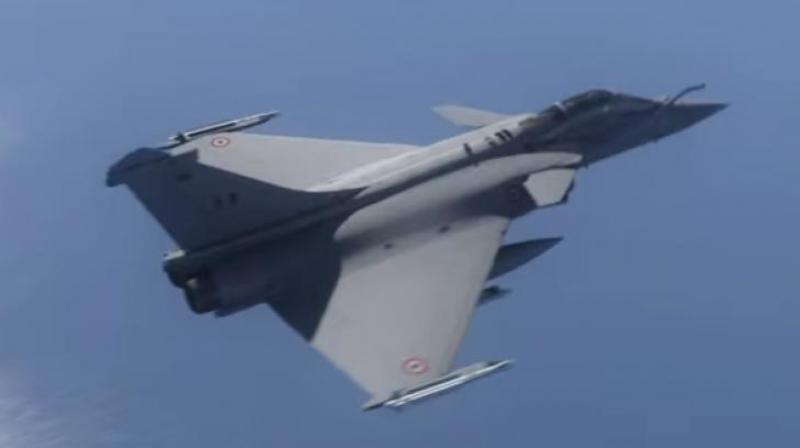 On July 13, a day before Bastille Day, during a press conference jointly addressed by French President Emmanuel Macron and German Chancellor Angela Merkel in Paris, the two nations announced their intention to cooperate for the development of a future combat aircraft, which could one day replace the Rafale of Dassault Aviations and the Eurofighter/Typhoon.

Mr Macron asserted that “road maps” and joint investment opportunities in 18 areas were discussed with Ms Merkel; it included a fifth-generation fighter plane.

The young French President added that this would help reduce duplication and enable the European nations to more effectively pursue export opportunities.

Apart from the fighter plane, European nations have agreed to further develop the Airbus Helicopters Tiger attack rotorcraft and complete work on a medium-altitude, long-endurance “Eurodrone” unmanned vehicle as well as military satellites.

Mr Macron said: “It is a deep revolution — but we are not scared of revolutions when they are conducted in peaceful manner.”

According to Flight Global, the French President described the venture as part of a broader integration of several European partners for the development, deployment and export of combat equipment.

Airbus Defence and Space, which works on the Eurofighter, welcomed the announcement “to jointly develop a next-generation fighter jet”. A communiqué added: “Strengthening the Franco-German axis will help to safeguard critically needed European defence capabilities in the future.”

On June 9, Fernando Alonso, the head of Airbus Group’s military aircraft division had affirmed: “We have to do this in Europe. There’s no place to do two or three different systems.”

It would not be the first time that Europeans try to collaborate in the field of defence R&D and production, though the outcome has not always been up to the mark.

Soon after the World War II, a man had a revolutionary proposal: to unite the enemies of yesterday, France and Germany, by bringing them to work together. Jean Monnet, the father of Europe wrote: “the course of events must be altered. To do this, men’s attitudes must be changed. Words are not enough.” Monnet thought that since Germany and France had to rebuild their industry, it was bound to revive the old rivalry. Monnet’s idea was to reverse the problem — what had been the seed of war must become the seed of unity — his proposal was therefore to create a high authority which could manage the resources in coal and steel for both nations. This was the birth of the European Coal and Steel Community, the embryo of the European Economic Community (EEC) and later the European Union.

But it is not always easy. Francisco Duarte in The Inquisitr quotes the case of the joint design for the main battle tank for the France and German armies in 1957. He says: “After some years of development and construction of opposing prototypes, one of the German proposals was chosen. Even before the decision was taken, relations started to go sour with other Nato partners, which, among other developments, meant a split in the project for a European tank. The Germans would eventually create the Leopard 1, while the French pursued their own concepts, leading to the unveiling of the AMX-30.”

Hopefully it will be different this time. More recently, we have the example of the UCAV (Unmanned Combat Aerial Vehicle) developed by Dassault Aviation of France as the prime contractor.

The nEUROn European drone project perfectly reflects the original European “spirit” though ironically, Germany is not directly associated. Six European countries have decided to build an UCAV as a technology demonstrator.

This European programme has been designed to pool the skills and know-how of Alenia Aermacchi (Italy), Saab (Sweden), EADS-CASA (Spain), HAI (Greece), RUAG (Switzerland) and Thales (France) to produce the drone of the future.

With a length of 10 metres, a wingspan of 12.5 metres and an empty weight of five tonnes, the aircraft is powered by a Rolls-Royce Turbomeca Adour engine.

It was French President Jacques Chirac who unveiled the Dassault-led nEUROn project in June 2005; it marked the beginning of the six-nation research programme to build a technical demonstrator.

The project crossed a major milestone on December 2012 when the UCAV had its first successful flight from Istres airbase, near Marseille in South France.

Flight trials in France to evaluate its stealth characteristics were successfully completed in March 2015. It was followed by sensor evaluation trials in Italy, which were completed on August 2015. In July 2016, extensive stealth and detection tests were conducted with the nEUROn and the Charles de Gaulle carrier group.

In November 2014, a two-year feasibility study was started by the French and British governments. It could lead to a programme combining the experience of the BAE Systems Taranis and nEUROn programs into a Future Combat Air System.

One of the most interesting aspects of the project is the close collaboration between different European partners.

Monnet had prophesied: “Europe will be built through concrete realisations, creating at first a de facto solidarity.” For him, it was essential to “develop habits of cooperation among nations which had so far only known relationships based on power”.

NEUROn is undoubtedly an extraordinary technological challenge for the European companies involved.

But let us come back to the development of a fifth-generation combat aircraft. India has tried to work with the Russians. The project is not doing well.

Franz-Stefan Gady wrote in the Diplomat an article entitled: “India, Russia 5th Generation Fighter Jet Deal is Lost”: “The transfer of sensitive defence technology from Russia to India has been one of the most contentious issues between the two sides right from the start.”

Gady commented: “India wants a guarantee that it will be able to upgrade the fighter jet in the future without Russian support, which would require Moscow sharing source codes (sensitive computer code that controls the fighter jet’s various systems — the key to an aircraft’s electronic brains).”

Recently, Sergei Chemezov, the CEO of Rostec, the Russian state corporation which develops and promotes hi-tech defence and civilian products worldwide refused to speak about the future aircraft, which was not mentioned in the Saint Petersburg Declaration (“A vision for the 21st century”), when Prime Minister Narendra Modi visited Russia in early June.

Delays are said to have been caused because New Delhi and Moscow disagree on over many fundamental aspects such as work and cost share, aircraft technology or numbers of aircraft to be ordered by India.

A question, though presently theoretical, could be raised, why can’t India join the European project? Europe will require a market for its fifth generation aircraft; in the coming decades, India will need hundreds of planes, having to cope with two fronts.

Mr Modi has developed an excellent rapport with Mr Macron and Ms Merkel; it would make economic and strategic sense for India to partner Europe. It could be good for the European industries as well, as they would get crucial financial support and a market.

It is worth thinking about such far-away possibility; it could be a win-win deal for India too as Delhi would be involved in the project from the conception.