Technology   In Other news  25 Mar 2020  Respiratory valves, other medical devices for coronavirus treatment could be 3D printed during shortage
Technology, In Other news

Respiratory valves, other medical devices for coronavirus treatment could be 3D printed during shortage 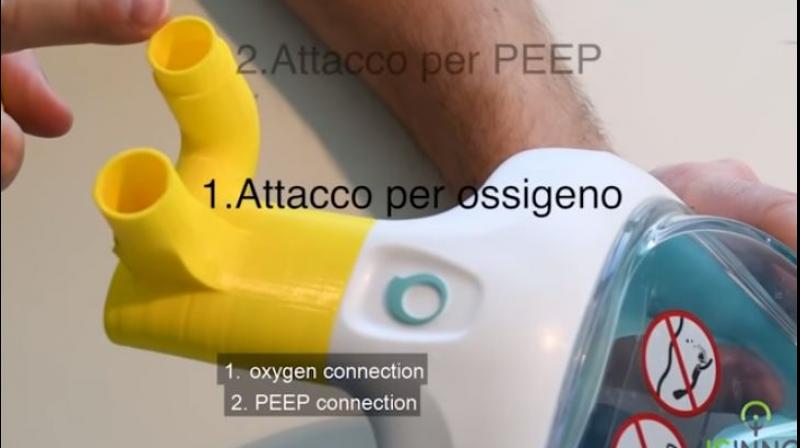 A screengrab of a video on Isinnova's website shows how to fit its 3D printed Charlotte valve on to Decathlon snorkelling mask to repurpose it into an emergency respiratory mask. (Image | Isinnova.it)

Chennai: When an Italian hospital ran out of valves used in ventilators, manufacturers in the country began 3D printing the implement and supplied it to hospitals.

Italian Engineering company Issinnova collaborated with an expert in 3D printing, research and development at manufacturing firm Lonati SpA and together reverse-engineered the design from existing valves to meet the shortage.

Lonati SpA’s Michael Faini was quoted saying by Fast Company as saying that “the company’s SLS 3D printers can print with PA12, a material that can be sanitised and used for biomedical purposes”.

Similarly in the US, printer and computer maker HP said it was looking at 3D printing plastic door adaptors, that allowed hospital workers to open doors without using their hands. The door adaptor could be pushed open with a forearm or elbow.

"We will make available any HP proprietary design files for these parts so they can be produced anywhere in the world,” HP said in a statement on March 18.

HP India could emulate its American counterpart, as could other companies and startups that have 3D printing capabilities.

Tata Motors has used 3D printing to create prototypes in its research and development facility at Pune, and could possibly help with medical implements if their 3D printers would work for the purpose.

Divide by Zero was quoted in a September 2018 Mint report as being the largest 3D printer maker in India. Perhaps, the company could collaborate with the Central or State health ministries to identify medical equipment that could soon face a shortage and come up with open source design files that can be used on their machines to print out equipment as needed.

Maker Village of the Kerala Startup Mission, a government initiative, is reported to have several 3D printers at its disposal. These machines could also be used to print medical devices and auxiliary devices.

3D printing has already been used in the medical field to produce prosthetics and surgical tools. Companies familiar with the field could reimagine existing products, like Isinnova did with the snorkelling mask. The Italian company produced an emergency ventilator mask by collaborating with Decathlon. The sports goods maker's snorkelling mask was fitted with isinnova's patented 3D-printed Charlotte valve, to suit medical purposes.

Isinnova says the prototype was tested at an Italian hospital and it would be provided to patients, subject to them consenting to use an uncertified biomedical device.

The Italian company has provided all the resources on 3D printing the Charlotte valve and how to use it to fashion an emergency ventilator mask, on its website, in a non-profit initiative.