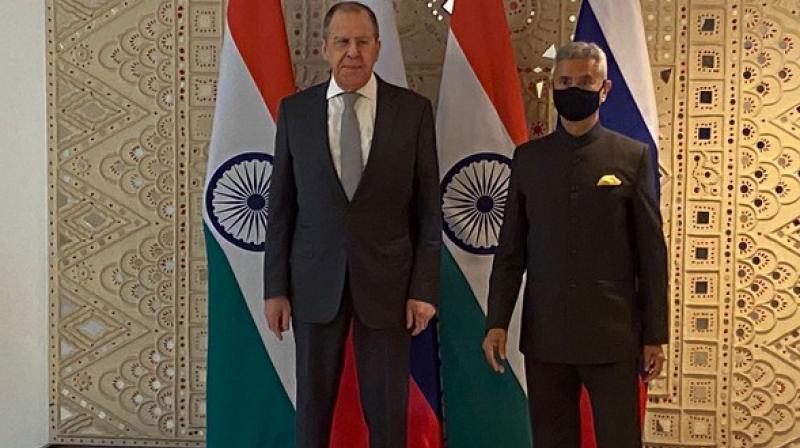 New Delhi: External Affairs Minister (EAM) S Jaishankar on Monday met Russian Foreign Minister Sergey Lavrov on Monday ahead of the inaugural meeting of the 2 + 2 dialogue mechanism at the level of the foreign and defence ministers.

The Ministry of External Affairs (MEA) last month had said that the agenda for the "two plus two" format dialogue between India and the Russian Federation will cover "political and defence issues of mutual interest".

"The agenda for the dialogue will cover political and defence issues of mutual interest. The establishment of this new mechanism of two plus two dialogue is expected to further strengthen the strategic partnership between the two countries," MEA spokesperson Arindam Bagchi had said last month.

It will be the first face-to-face meeting between Putin and Prime Minister Narendra Modi, after the meeting on the sidelines of the BRICS summit in November 2019.

On Saturday, the Russian Ambassador to India Nikolay Kudashev had said that he is expecting a "sizeable and formidable joint political statement" from the annual summit.

"Negotiating teams are working about outcomes of the Summit, work is on. But what's clear for today is that one of the outcomes would be a sizeable and formidable joint political statement," Russian Envoy said in an exclusive interview to ANI.

"It would be a very comprehensive paper, a comprehensive document covering all dimensions of our ties beginning with global issues and the UN revived commitment to itself to its central position in the modern world. Then would come regional issues, Afghanistan included," he added.

Both countries are expected to sign more than 10 agreements following annual talks between PM Modi and President Putin. These agreements will be in the fields of space, culture, science and technology, defence etc.