Mamata wraps up dharna after EC acts against 3 BJP leaders 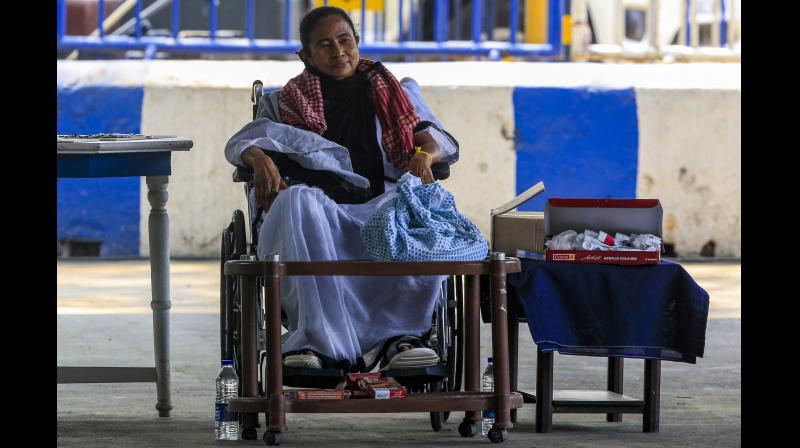 Five hours before the end of the ban on her campaign, Ms Banerjee cut short her dharna at around 3 pm and headed for home at Harish Chatterjee Street in Kalighat. —AP

Kolkata: West Bengal chief minister Mamata Banerjee on Tuesday wrapped up her dharna in protest against the Election Commission’s “undemocratic and unconstitutional” ban on her campaign for 24 hours in the Assembly election within few hours after the EC ordered similar steps, in a balancing act, against three BJP leaders -- Rahul Sinha, state chief and Midnapore MP Dilip Ghosh and Nandigram candidate Suvendu Adhikari -- over their controversial remarks.

Though the Trinamul Congress supremo had announced she would sit on dharna from 12 noon, she reached the Gandhi Statue at the Maidan, which falls under the authority of the Army’s Eastern Command as it is defence land, quite early. From 11.45 am Ms Banerjee, in her wheelchair, began her silent protest, also a rare scene, sitting there alone.

As she was seen talking on her mobile before getting busy at painting, it came to light that her party’s application to the defence ministry for permission for her demonstration at the venue was yet to be cleared.

Eastern Command spokesman Wing Commander Mandeep Huda said: “We have received the application from the TMC for a no objection certificate for the Gandhi statue protest. It was received at 9.40 am today. It is under process. We have not yet issued the NOC for that. We are processing it as per laid down procedures and guidelines.”

Meanwhile the EC, in wake of the TMC’s questions on its impartiality, ordered a 48-hour campaign ban, starting from 12 noon on Tuesday, on Habra BJP candidate Rahul Sinha for his inflammatory remarks on the killings of four persons by the Central paramilitary forces at Shitalkuchi in Cooch Behar during the fourth phase of the polls.

“Not four, eight people should have been shot dead by the Central forces there! The Central forces should be issued a showcause notice asking why they killed only four and not eight. Goons are trying to deprive people of their democratic rights. Central forces responded appropriately. If it happens again, they will answer again,” the former state BJP president had claimed at a campaign rally on Monday.

After the order, he however said: “I hold the EC in high respect. But it is a severe punishment to me.” The EC also served a showcause notice to Mr Ghosh directing him to explain his recent threat to “repeat the Shitalkuchi-style killings at many places” during the polls by 10 am on Wednesday.

The poll panel also warned and advised Mr Adhikari, after getting his reply to its notice on his “begum” remark, in a veiled reference to Ms Banerjee, and his assertion that voting for his political opponent would imply voting for a “mini-Pakistan”, “to desist from using such statements while making public utterances during the period when the Model Code of Conduct is in force”.

Five hours before the end of the ban on her campaign, Ms Banerjee cut short her dharna at around 3 pm and headed for home at Harish Chatterjee Street in Kalighat.

Resuming her campaign on Tuesday evening, Ms Banerjee said: “On one hand the BJP leaders will keep campaigning while on the other hand I cannot campaign. You be the judge… I will leave it to the masses to judge… I fail to understand why there has been an all-round attempt to stop me from campaigning,” the chief minister said at Barasat in North 24 Parganas.