Next expose will jolt people of Delhi, claims Kapil. 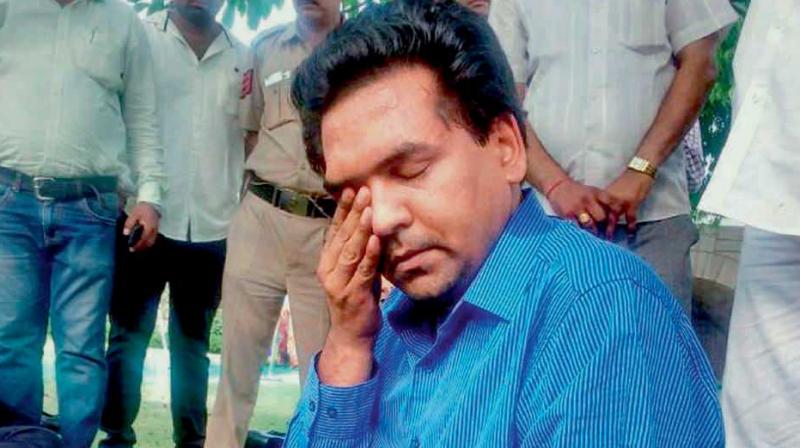 Sacked AAP MLA Kapil Mishra breaks down during his visit to Rajghat as he continues his hungerstrike in New Delhi. (Photo: PTI)

After his removal as a minister and his suspension from the party, Mr Mishra launched a fast demanding that the AAP divulge details of foreign trips made by five leaders of the party. The AAP, in turn, has accused him of following a script penned by the Bharatiya Janata Party.

Mr Mishra on Friday also  claimed that his next “expose” will rattle the people of Delhi who “trusted the Aam Aadmi Party.”

During the day, Mr Mishra visited Rajghat, where he had made startling allegations of corruption against Mr Kejriwal on Sunday.

On Thursday, several AAP leaders had tweeted a picture in which Mr Mishra was seen sitting with Delhi BJP chief Manoj Tiwari. The ousted minister’s mother, Annapurna Mishra, a former mayor of Delhi, claimed that the picture was clicked at an event to felicitate senior AAP leader Kumar Vishwas’ father. In an open letter to Mr Kejriwal, she said he and his Cabinet colleagues had attended the event.

She said it was Mr Kejriwal who pursued her to convince Mr Mishra to join politics despite the latter not being interested. In her letter, she also alleged that the AAP national convenor’s men had started calling her “corrupt” while he has maintained a stoic silence over the issue.

“You wanted him (Mr Mishra) to fight elections but he wasn’t agreeing. Then you had come to me saying ‘you needed Kapil’. Today, your own people are calling me corrupt and you are quiet,” she said.

Ms Mishra claimed that she was one who organised the first mohalla sabha in Delhi in 2007.

She reminded the Delhi chief minister that he too had attended it and even mentioned it in his book Swaraj.

“You had said that when the AAP MLAs had their first meeting at the Constitution Club after winning 28 seats, they were shown a video of a mohalla sabha organised by me,” she said.

The former mayor also accused Mr Kejriwal of spreading lies regarding her son. She said her son was only “an agent of truth” and would keep soldering on as he was very stubborn.