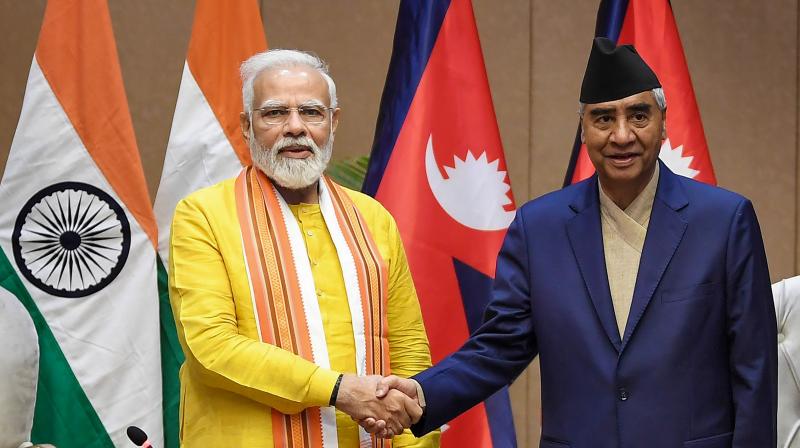 The cordial welcome that the Indian Prime Minister received on his latest visit to the Federal Democratic Republic in the Himalayan region is a pointer to how India-Nepal ties have mended since the awkward time two years ago when, during the Communist regime of K.P. Sharma Oli, territorial claims were made and a border dispute whipped up by Kathmandu. It is to India’s credit that it seized upon the opportunity to restore relations to earlier levels by close interaction with Sher Bahadur Deuba’s government.

The signing of a number of India-Nepal pacts may have had more to do with religious exchanges pertaining to the ancient Buddhist connection between the two countries. Those ties may be further extended by the active promotion of Buddhism’s holy sites in the two nations by creating a circuit to facilitate spiritual journeys of half a billion Buddhists from around the world.

Tech transfer with regard to tapping hydroelectric power sources to help the power-deficient nation with rich hydro resources is a necessity. It’s likely to help at a time when the world itself is reeling under the impact of the Ukraine situation with fuel and food costs going through the roof just as global food shortage is being feared as the granary of Europe is embroiled in war thanks to Vladimir Putin’s aggression.

Regional imperatives have seen India play an active role to try and help Sri Lanka during its worst ever economic crisis while the Maldives put out a presidential decree to stop the “India Out” campaign by the combined Opposition.

There is very little India can do regarding Pakistan’s historical attitude and not even the return of the Sharifs and the Bhuttos can end old dreams regarding the Kashmir Valley while China will remain among the prickly neighbours’ category.

India’s policy to earn regional trust appears to be paying dividends, including in ties with Bangladesh, despite the obvious presence of the Chinese hand ready to fork out funds in exchange for influence. India might not have huge monies to hand out in what is a difficult time of runaway inflation for all but reassuring diplomacy through the optics of visits of the Prime Minister seems to be helping to change the perspective in the subcontinent.

K.C. Singh | A retreat from liberalism: Which way will India go?