Around 300 players from Mumbai, Navi Mumbai and Mumbai Suburban made online entries for the league and the auctions were held last month. 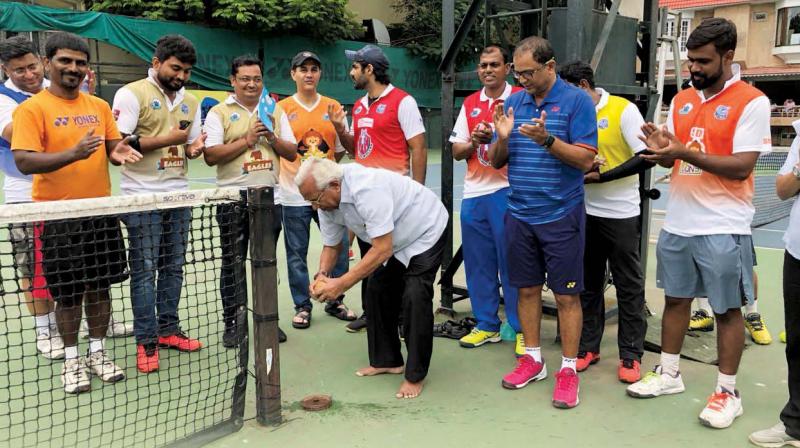 The League tournament will give junior players A feel of team event and professionalism during off-season.

The Mumbai Open Junior Tennis League (JTL) kicked off at the Maharashtra State Lawn Tennis Association (MSLTA) courts on Saturday. The Pune leg had started before and has reached the play-off stages. The winners of the Pune and Mumbai legs will play the Super Cup that will be played on the sidelines of this year’s L&T Mumbai Open WTA. The first WTA event was held last year at Cricket Club of India Tennis courts.

“This will give an opportunity to young kids from Pune and Mumbai to watch top women stars in action and dream to be like them. The next year the JTL will be played in Nasik , Kolhapur, Solapur and Nagpur,” said MSLTA Secretary, Sunder Iyer.

“In tennis normally players are mostly left on their own especially in singles events and here we want to give them feeling of team event. Normally in off-season players don’t play much tennis and due to rains they don’t opt for coaching also but we are giving them an opportunity to play and also train with their team coaches,” Iyer added.

Around 300 players from Mumbai, Navi Mumbai and Mumbai Suburban made online entries for the league and the auctions were held last month. The league is featuring six teams in the age category of under-10, 12  and 14. The matches are being played on all-play-all format. Top four teams will qualify for the semi-finals.

“It is a great opportunity for junior players from all academies and clubs who are being clubbed together and then got into teams through auction process, the league will provide them an opportunity to display their skills” Iyer said.

Every team will have players in the age group 10-14 so each match becomes important helping to build friendship between players and parents.

“The idea behind the event was to bring out the best in the junior players and help them to think like professionals at an early age. Such a league will also encourage them to put in hard work and become better players and help to build a family spirit and camaraderie among the tennis fraternity of Mumbai,” Sharad Kannamwar Tournament Director of the event, said.

Commissioner of the Mumbai Open Junior Tennis League Manoj Vaidya informed each tie consists of eight matches.  All matches will be played best of 11 games (6 games to win) with Tie-Break at 5-all. The winner of the tie will be decided on the total number of games won by the team.