Technology   In Other news  05 Aug 2020  Trump's talk of government getting a cut of TikTok deal not legally enforceable
Technology, In Other news

The President sometimes floats ideas or actions that get set aside without follow-through. 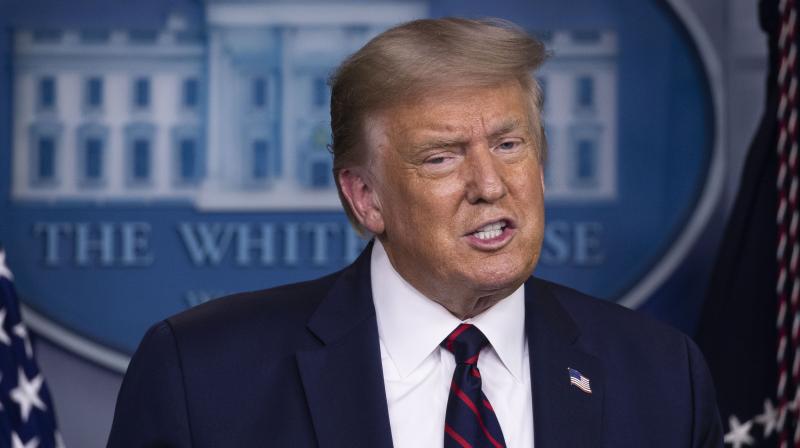 Trump said Monday to reporters that the US “should get a very large percentage of that price because we’re making it possible,” adding that “we want and we think we deserve to have a big percentage of that price coming to America, coming to the Treasury.” There’s no legal precedent in antitrust law for such a payment, said Gene Kimmelman, a senior adviser at the advocacy group Public Knowledge and a former antitrust official at the Department of Justice. (Photo | AP)

New York: President Donald Trump’s demand that the US government get a cut from a potential Microsoft purchase of TikTok is the latest unprecedented scenario in an unprecedented situation.

Microsoft is in talks to buy parts of TikTok, a forced sale after Trump threatened to ban the Chinese-owned video app, which claims 100 million US users and hundreds of millions globally. The Trump administration says TikTok is a national-security concern. How a ban would have worked was not clear; that federal authority has never been used before with a consumer app. TikTok denies that it would send US user data to the Chinese government.

Microsoft did not address a potential price when it confirmed the talks.

Trump sometimes floats ideas or actions that get set aside without follow-through. Appearing on the Fox Business Network Tuesday, White House economic adviser Larry Kudlow appeared to walk back the idea of a payment to the Treasury, saying “I don’t know if that’s a key stipulation.”

TikTok was under review by the Committee on Foreign Investment in the United States, known as CFIUS, a US government group that studies mergers for national-security reasons, for its acquisition of another video app, Musical.ly, in 2017. CFIUS collects filing fees, but those top out at $300,000.

“I doubt that’s what Trump has in mind,” said Hal Singer, an antitrust expert and principal at consulting firm Economists Incorporated. “Outside of that I can’t think of any means by which the US could basically get its vig on its forced transfer.” A “vig” is slang for interest on a loan, usually in the context of illegal activity, or the fee charged by a bookie for a bet.

There’s no legal precedent in antitrust law for such a payment, said Gene Kimmelman, a senior adviser at the advocacy group Public Knowledge and a former antitrust official at the Department of Justice. “In terms of a foreign company agreeing to sell assets to a US company subject to antitrust review, I can’t see any logical basis under which Treasury or the White House would be negotiating elements of the financial portions of the deal.”

While noting that he is not an expert in all areas of US law and the broad authority that the president has, he said the TikTok deal and the White House’s role in it was highly unusual. “Not in my experience have I seen any engagement from the White House in this manner,” he said. “It’s already a unique situation from start to finish with the government intervening to prevent use of a service in the US”

White House press secretary Kayleigh McEnany sidestepped a question Tuesday about what authority the federal government had to collect a portion of proceeds from the potential sale of TikTok, saying “I’m not going to get ahead of the president on any official action.”

Treasury did not reply to questions about what legal precedent Trump is relying on to get a payment for the TikTok deal.

In a statement Sunday, Microsoft had said that that it was committed to the deal “subject to a complete security review and providing proper economic benefits to the United States, including the United States Treasury.”

TikTok has said that it is loved by Americans and “will be here for many years to come.” In a memo ByteDance CEO Zhang Yiming sent Chinese employees Tuesday, a translated version of which ByteDance sent to The Associated Press, he said that he felt the goal of the Trump administration was not the forced sale of TikTok’s US business to an American company through CFIUS, but “a ban or even more.”

Representatives for Microsoft and TikTok did not immediately reply to questions about the payment demand Tuesday.